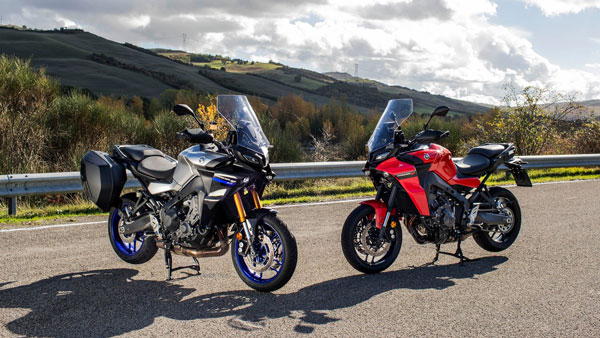 The engine is the latest version of the Yamaha Triple. At present, the capacity of the engine is 890 cc. The next generation Crossplane 3 (CP3) engine has a 3mm long stroke.

Yamaha also upgraded the delta box chassis of the 2021 Tracer 9 and Tracer 9 GT. The company claims that it is lighter and more compact than before. Like the Yamaha MT-09 and MT-09 SP, the new Tracer 9 introduces the six-axis IMU feature derived from the Yamaha YZF-R1.

Four riding modes are another feature of the bike. Mode 1 is the most aggressive. Its uses include all-around ride mode 2, smooth power delivery mode 3, and wet ride mode 4.

The 2021 Yamaha Tracer 9 has two 3.5-inch TFT screens. While the speed, engine speed, fuel gauge and gear position are displayed on the left screen, the right screen is divided into four segments and displays additional information such as odometer, dual trip meter, and temperature.

Yamaha uses LED lighting everywhere on the Tracer 9 and Tracer 9GT bikes. These include daytime running lights (DRLs) and taillights with a three-dimensional effect.

The top-spec variant is the Yamaha Tracer 9GT. It comes with all the updates on the basic model. There are also touring-specific additions to make long-distance riding more comfortable.