Famous serials of yesteryears such as because Saas Bhi Kabhi Bahu Thi, Kasauti Zindagi Ki, Kahani Ghar Ghar Ki, Kumkum and many more shows were loved by the audience. Ekta Kapoor’s show Because Saas Bhi Kabhi Bahu Thi was telecast for many years and also made many records in the TRP list. Actress who won the hearts of people by playing the role of Tulsi Virani in it Smriti Irani Has shared a throwback video of the Star Parivar Award, showing all the old stars.

Sharing the video, Smriti Irani wrote in the caption, ‘The year was 2004 .. When politics was taking me on a new path .. I found my extended family waiting patiently to come to my house every night at 10.30. . Some said that I used to cry a lot, but my fondest memories, associated with those who hugged me, blessed me that we were bound by a spell of a TV screen. When Angan remembers that time with blessings, many faces are seen, which I call friends and colleagues. Sudhan Aunty (Ba) and Mahani Pandhari Zukar my makeup man is not with us today. Many are a phone call away, so call an old friend during this lockdown. Who knows, they probably miss us as much as we do. ‘ 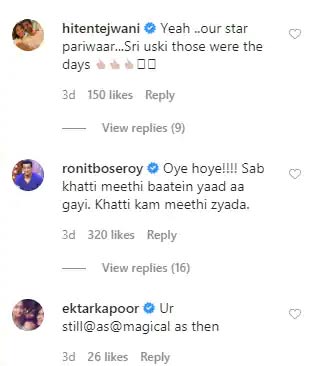 Many co-stars of Saas Bhi Kabhi Bahu Thi have commented on this video, replying to Smriti Irani. Karisma Tanna wrote, ‘Thank you .. I still remember the first day of shooting, when none other than you were talking to me, because I was new. You also used to have lunch with me. Love You.’ At the same time, Ronit Roy commented, ‘Oye hoye .. All sour sweet things remembered .. sour sweet less sweet.’