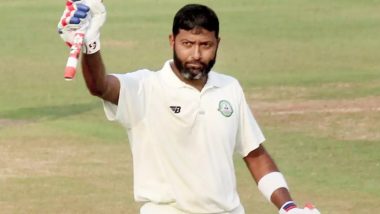 Dehradun, 12 February: Former Indian cricket team veteran Wasim Jaffer has resigned from the post of head coach of Uttarakhand Cricket Team (Uttarakhand Cricket Team). The former veteran player has been accused of spreading communalism in the team. Team manager Navneet Mishra has made many allegations against him, while Jafar has given answers to these allegations which are as follows.

At the same time, Wasim Jaffer has described all these allegations against him as very serious. He said in a press conference, ‘The communal matter imposed on me is very painful, that’s why I have come to talk. You guys have known me for a long time and you will know how I am. Had I been communal, Samad Fallah and Mohammad Nazim would have played every match. It is a very wrong thing to think or say.

Apart from this, he said that out of the 22 players selected for the Mushtaq Ali Trophy, only three were Muslim. They say that if I were communal, then why would I bring Jai Bisht? He further said that I wanted to make him the captain of the team. At the same time, he also said that he and not the selectors had thought of commanding the team to Iqbal Abdullah.

At the same time, he has called the maulvi during the training session, while answering the question of knowing that it was not his decision. The clerics were called by Iqbal Abdullah. He says that orders must have been taken from Navneet Mishra before calling the clerics.

After this incident, many former players of Team India are seen with Jafar. Anil Kumble, former captain and coach of Team India, tweeted on Twitter, writing, ‘Hoon with you Wasim. You did the right thing Sad that players will have to be deprived of your mentorship. Apart from Anil Kumble, former Indian players Manoj Tiwari and Faiz Fazal have also expressed grief by tweeting.