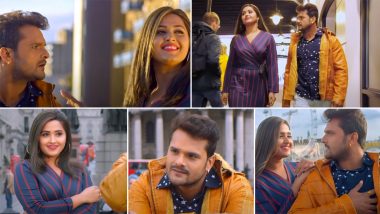 Khesari Lal Yadav and Kajal Raghavani are seen winning the hearts of the audience this time with their exciting and breathtaking chemistry at a foreign location. Khesari is seen singing a song to woo Kajal at the beautiful location abroad. The romantic and candid moments between the song Kajal and Khesari are beautifully shot.

See this song by Khesari Lal Yadav and Kajal Raghavani:

This song has been released only a few hours but till now it has received more than 6 lakh likes and comments on YouTube. This song is being well liked on YouTube and fan clubs of artists are also sharing it.

This song has been released on YouTube by Filchi Movies on the Internet. Khesari and Kajal are arguably once again creating a ruckus among the audience with their amazing bonding.