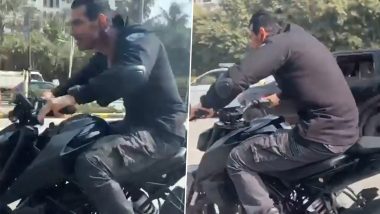 John Abraham Shoots for Attack: Bollywood’s handsome hunk John Abraham is busy these days to complete his work commitments. These days, John is busy shooting for his upcoming film ‘Attack’, from which he constantly shares his funny photos and videos with his fans and gives glimpses of the film. Fans also eagerly wait for their new posts on social media.

John has shared a video of himself on Instagram in which he was seen riding on a sports bike in the same thrilling style of his film ‘Dhoom’. Wearing a black shirt and jeans, John appeared on his bike in a very cool style.

Let me tell you that in the film ‘Attack’, John Jacqueline will be seen in the lead role along with Fernandes and Rakul Preet Singh. It is an action thriller film directed by Lakshya Raj Anand and produced by John Abraham along with Jayantilal Gada and Ajay Kapoor.