VI Nations: the line-up with Jalibert against England 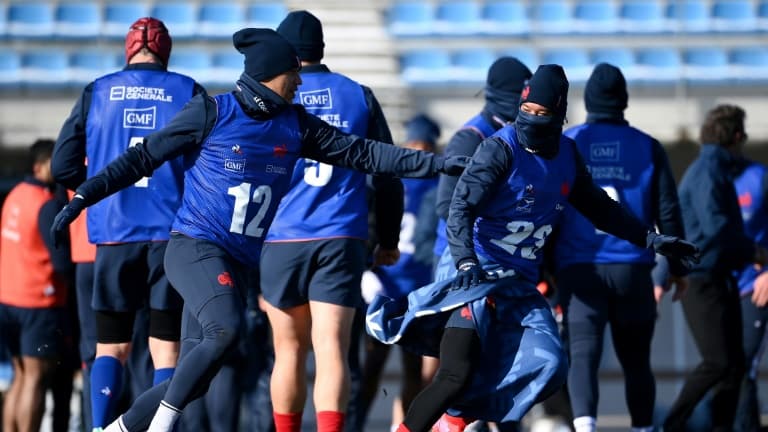 One month after its historic victory in Ireland, the XV of France travels to England on Saturday (5:45 p.m.) for the Six Nations Tournament. With Matthieu Jalibert at the opening, and Romain Taofifenua on the second row to replace Bernard Le Roux.

After two particularly hectic weeks in Marcoussis, the XV of France will finally find the ground on Saturday, against England (5.45 p.m.). A match against the English rival is always to be feared, especially when it comes to a trip to Twickenham and when the French players are lacking rhythm, because of the Covid-19 contaminations, the different periods of isolation and postponement of the match against Scotland.

As for what is finally the third match of the French in the Tournament of the VI Nations, Fabien Galthié and his staff have opted for continuity with Matthieu Jalibert holder as opening half.

The French staff had to make a choice between Matthieu Jalibert and Romain Ntamack. If it is indeed the Toulousain that Fabien Galthié wanted to install in the position of number one, the coach had to review his plans with Ntamack’s jaw injury. Matthieu Jalibert thus started the Tournament as a holder at the opening and this will also be the case in England. Highly anticipated, he has shown that he can fully assume this role. Above all, the Bordeaux, particularly offensive with his club, has been able to adapt to the more managerial style of play requested by the staff of the Blues. Not much to blame him except failures against the posts against Ireland. “Matthieu has fulfilled the contract perfectly since he took charge of the team,” said Laurent Labit, coach of the back lines, at a press conference on Wednesday.

Romain Ntamack’s mixed return last Saturday against Brive must also have weighed in the balance. The tricolor staff has in any case not finished tearing their hair on this issue, since the question should arise again the following week, when it comes to facing Wales.

Virimi Vakatawa will not go through the box replacing – or finisher, according to the new expression. Victim of a knee sprain at the end of January, the powerful center holds. He takes the place of Arthur Vincent, outside the group because still affected by the Covid-19. On the wing, it will be Teddy Thomas. The Racingman replaces Gabin Villière, injured in the hand during Toulon-Racing last weekend.

It was the other big question of this composition: who to replace Bernard Le Roux, whose package was announced Tuesday evening (elongation in the thigh)? Particularly complex question because, at this post, the French reservoir is not bloated. The staff therefore had the choice between Cyril Cazeaux, Romain Taofifenua and Swan Rebbadj, called in as reinforcements. Wednesday, during high intensity training, it is the Bordeaux, with a more hybrid profile, who wore the starting chasuble but it is Romain Taofifenua who will finally start. Finally, in the third row, Dylan Cretin was preferred to Anthony Jelonch.

Against the Blues on Saturday, England will present themselves without much certainty. Beaten against Scotland at the opening of the Tournament (11-6), they were then humiliated by the Welsh (40-24). In three games, Owen Farrell’s teammates only won against a very weak Italian team, nothing to be reassured of. But facing the XV de la Rose is still an important meeting. Because it’s England and the French are still looking for their first Grand Slam since 2010.

Mistrust also for the Blues because the preparation of the Tricolores was not optimal. Some, like Antoine Dupont or Charles Ollivon to name a few, affected by the Covid, have not played since the victory against Ireland (15-13). Others were able to stretch their legs in Top 14. For Montpellierers Anthony Bouthier and Paul Willemse, the week was further disrupted by the coronavirus. Because of a case of Covid detected at ASM, which Montpellier faced last Friday, the two MHR players had to be placed in solitary confinement and could not train normally on Tuesday. They finally resumed the next day for the high intensity session.

The composition of the XV of France: