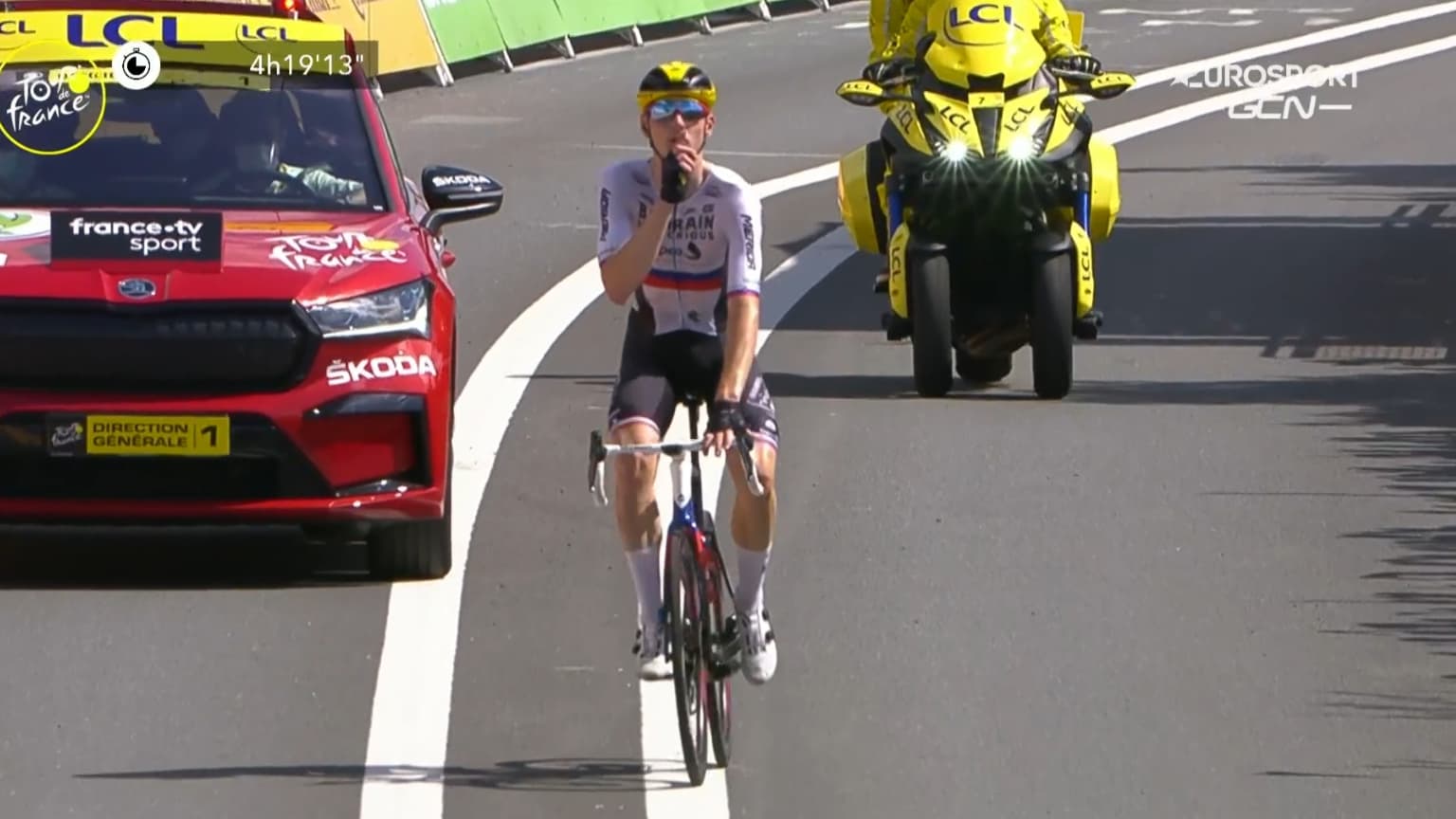 The Slovenian rider Matej Mohoric won this Friday the 19th stage of the Tour de France between Mourenx and Libourne. A symbolic victory, his second in this 108th edition, while his team is targeted by a police investigation.

A success in trying to silence the critics. Matej Mohorič was the strongest this Friday between Mourenx and Libourne to clinch a second success in the Tour de France, after arriving at Le Creusot. The third consecutive victory for the Slovenes, after the double of Tadej Pogacar in the Pyrenees. It is also the third victory of the Bahrain-Victorious formation, involved in a police investigation for suspicion of doping. A victory accompanied by a symbolic gesture (finger pointing at the name of his team, then on his mouth) in support of his team.

On Wednesday evening, the gendarmes of Oclaesp, the central office competent on the subject, carried out searches in the hotel occupied by his training in the vicinity of Pau. “I thought about what happened 48 hours ago when I was treated like a criminal,” Mohoric reacted after the arrival. In my opinion, this is quite a good thing. There were checks but nothing was found. “

The 28-year-old escaped from a group of eleven runners at 25 kilometers to complete the work alone, 58 seconds ahead of Christophe Laporte, Casper Pedersen and Mike Teunissen. The Slovenian has demonstrated all his skills as a roller.

If this day was announced peaceful after two high mountain stages and before the decisive time trial this Saturday, it was not. The start of the stage was marked by further crashes, the first involving in particular Geraint Thomas, Benoît Cosnefroy and Wouter Poels, the second knocking down Mark Cavendish, Sonny Colbrelli and Julian Alaphilippe. The Briton missed the opportunity to clinch a 35th victory at Libourne.

While several riders tried to take the lead, the good breakaway was validated 192 kilometers from the finish, with the French in the spotlight (Franck Bonnamour, Christophe Laporte, Élie Gesbert, Julien Bernard, Anthony Turgis). If the Israel Start-Up Nation did a lot of work to contain the 20 fugitives, they quickly took more than 10 minutes ahead of the peloton, taking turns attacking for a good shot.

The favorites, well established in the yellow jersey group, spent a quiet day before the time trial this Saturday between Libourne and Saint-Emilion, like Tadej Pogacar. The peloton crossed the line 21 minutes after Mohoric.