The entire US adult population will be eligible for the Kovid-19 vaccination by May 1: Biden 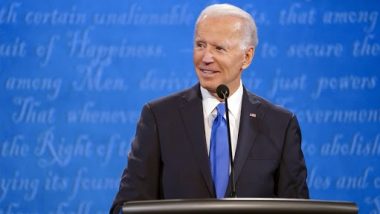 Washington, March 12: US President Joe Biden has announced that by May 1, all adult American people will be eligible for the Covid-19 Vaccination. He said that Independence Day is a step towards normalizing the situation till July 4. Read also: Covid-19 vaccines: South African government raised concerns over fake Kovid-19 vaccines

In his first prime-time address to the nation on Thursday after taking office in January, Biden announced the deployment of more than four thousand personnel to help with the vaccination campaign, with the number of troops deployed in this campaign from six thousand Has exceeded.

Biden chose the day of 11 March to address the nation. A year ago, on this day, the World Health Organization declared the corona virus a global pandemic. Biden’s address lasted a little over twenty minutes.

In this, he said, “My fellow Americans, you all want to know when everything will be normal. So the truth is that once the situation and life become normal again, there is only one way to bring the economy back on track: defeating the virus. But this is a very complex operation. ”

He said that as the President of the United States, he is using every power and trying to achieve this goal on a war footing.

Biden said, “Thank God that we have made some progress now.”

He said that as of Thursday, more than 5,27,000 people have died due to Kovid-19 in the US and this figure is the total number of people who died in World War I, World War II, Vietnam War and 9/11 terrorist attack. More than.

According to John Hopkins University, the country most affected by the corona virus is the United States, with 29,1,50,068 cases of infection and the number of deaths is 5,29,102.

Biden said that in the first hundred days of his tenure, the target of vaccination of ten crore people is going to be fulfilled only on the 60th day of his tenure. He said, “All adult American people will be eligible to be vaccinated by May 1.” This is happening earlier than anticipated.