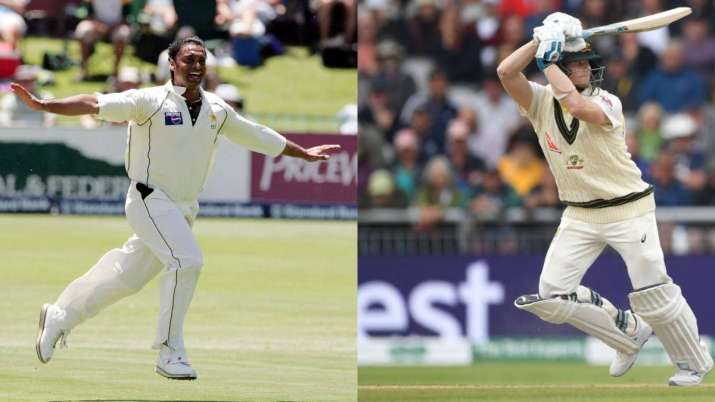 The former Pakistan fast bowler is spending more time on social media nowadays. In such a situation, he challenged the Australian run machine Steve Smith to dismiss the fourth ball on his Twitter account, after which the ICC trolled him.

Actually, a cricket website posted a picture on Twitter asking about the competition between the batsmen and bowlers. In this picture, players like Shane Warne opposite Virat Kohli, Bumrah in front of Anwar, Rashid Khan in front of Sachin and Shoaib Akhtar in front of Steve Smith.

Although this question was meant for cricket fans, but Shoaib Akhtar also gave his opinion on this. Commenting on this picture, Akhtar wrote, “Even after three sharp bouncers today, I can get Steve Smith out on the fourth ball, lol.”

Let me tell you, in the recent Ashes series, England fast bowler Joffra Archer had harassed Steve Smith with a bouncer and during this time he also hit the ball on Smith’s elbow too many times. In this context, Shoaib Akhtar tweeted this.

The ICC has trolled him badly on this comment of Shoaib Akhtar. The ICC has shared a photo of Shoaib’s tweet with a picture of US basketball player Michael Jordan, in which he is seen laughing after the comment.

Let me tell you, Shoaib Akhtar and Steve Smith met only once during a T20 match. In this match between Australia and Pakistan, Akhtar could not bowl in front of Steve Smith as he had already dismissed 34 runs in two overs after which he was removed from bowling.

Before Steve Smith, Akhtar has also spoken of dismissing Indian captain Virat Kohli. Akhtar had said that if he bowled to Kohli, he would bowl him out of the wicket as much as possible. This rounder tried to drive Kohli on the ball going out and Akhtar got him out.

See also  Akhtar said, Rohit has done well in Australia, then he can become captain

At the same time, Akhtar had also said that if this plan did not work, he would have bowled the ball to Kohli at a speed of 150 kmph and dismissed Kohli.

new DelhiBig news is coming about former Australia captain Steve Smith. He will no longer be part of the Indian...

Steve Smith told, what will be the plan of Australian team on the fifth day

SydneyIndia beat Australia by 66 runs in the first ODI of the series, after which the visiting team captain Virat...

IND vs AUS: ICC posted picture of Australian players, asked- Are you ready?

new DelhiCricket fans are desperate for the series between India and Australia. But now the wait is not long and...

AUS vs IND- shock to Team India, Ishant and Rohit out of first two Tests

new DelhiTeam India, who went on tour to Australia, is seen as a big shock. Dhakkar batsman Rohit Sharma and...