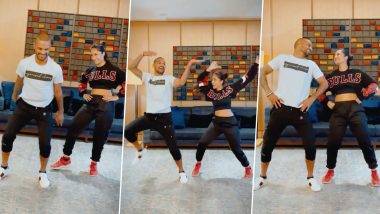 new Delhi: Dhanashree Verma, wife of Indian bowler Yuzvendra Chahal, has made tremendous headlines with her dance. Her dance videos are always viral on social media. One such video has become very viral on social media. Recently, Dhanashree Verma is seen doing Bhangra in a stunning style with opener Shikhar Dhawan. Her dance and expressions look amazing in the video. This video has been shared by Dhanashree Verma from her Instagram account, which has been liked more than 40 thousand times so far. Ind vs Eng 3rd ODI 2021: Shikhar Dhawan’s Atishi batting, ODI career’s 32nd half-century

Sharing this video, Dhanashree Verma wrote, “Bhangra in Gabbar’s style … together set fire to the Instagram reel. As I already told, Energy speaks …” In the video, both of them Steps look amazing. Both are seen enjoying, let us tell you that this is not the first time Dhanashree Verma has won the heart with her dance. Earlier, Dhanashree Verma was also seen dancing with cricketer Shreyas Iyer. That video also went viral on social.