Salman Khan shared a special post on social media for the fans celebrating this big victory, said this to everyone 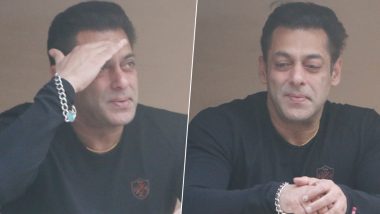 Bollywood’s Bhaijaan Salman Khan has shared a special post on social media and thanked all his fans who have loved and supported him. Recently, giving a huge relief to Salman Khan, Jodhpur Sessions Court rejected a petition filed by the Rajasthan government against him alleging that the actor submitted a fake affidavit in the court in the black deer hunting case. Have done

Expressing his happiness on this, Salman wrote on Instagram, “To all my fans..Thank you for your love and concern. Take care of yourself and the family God bless you love you.” With this, Salman has also shared a photo of himself.

After reading this post of Salman, his fans also sent congratulatory messages everywhere from Twitter and celebrated his success. It is noteworthy that Justice Raghavendra Kachwal, while giving his verdict in this case at 3.30 pm, said, “There is no foundation for this petition”. During this hearing, Salman was also present through video conferencing.

A petition was filed against Salman Khan, stating that Salman has presented wrong evidence in the black deer hunting case and lost his arms license. After this investigation, it was found that Salman had applied for a renewal in Bandra.

In the second petition, it was alleged that Salaman filed an affidavit stating that he has a pain in the ears and because of this, he cannot appear in the court. But he was shooting for the film. Now during the hearing, the court dismissed the petitions these days. Now the opposition party is also planning to move the High Court against Salman.