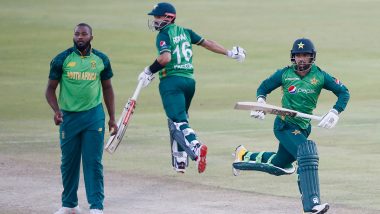 Centurion, 2 April: Pakistan cricket team defeated South Africa by 3 wickets in the first ODI match played on Friday at the Super Sport Park ground here. The match was decided on the last ball. The hosts had set a target of 274 runs to win in front of the guests. The Pakistan team looked easy to win, thanks to the brilliant innings of captain Babar Azam (103 runs, 104 balls, 17 fours) and Imam ul Haq (70 runs, 80 balls, 3 fours, 1 six) but the hosts looked in the final time. The bowlers tightened the knuckles and brought the match to an exciting turn. Mohammad Rizwan also contributed 40 runs for Pakistan. Apart from this, Shadab Khan scored 33 runs on 30 balls with the help of two fours and a six. Due to all this hard work, Pakistan won the match by scoring 274 runs for seven wickets in 50 overs. For South Africa, Enrich Notterje took 4 wickets for 51 runs.

Earlier, South African scored a target of 274 runs in the first ODI match being played at the Supersport Park ground here, with a century from Racy van der Dussen (123 not out) and a half-century by David Miller (50). Batting first after losing the toss, South Africa’s team scored 273 for six in 50 overs with the help of Dusen’s unbeaten 123 off 134 balls with 10 fours and two sixes and Miller’s five fours in 56 balls. . From Pakistan, Shaheen Afridi took two wickets, Harris Roff took two wickets, Mohammad Hasnain and Faheem Ashraf took one wicket each.

Earlier, South Africa did not have a good start and lost the wickets of Quinton de Kock (20), Aidan Marquram (19), Temba Bavuma (1) and Heinrich Klassen (1) for a total of 55 runs. Dusen then took over the innings with Miller and a 116-run partnership for the fifth wicket between the two batsmen. Apart from these, Andrey Fehlukwayo scored 29 runs in South Africa’s innings, while Kagiso Rabada remained unbeaten on 13 runs with the help of two fours in 10 balls.