PSG-Nice: feverish Paris, decisive Kean … What to remember from the Parisian victory before Barça 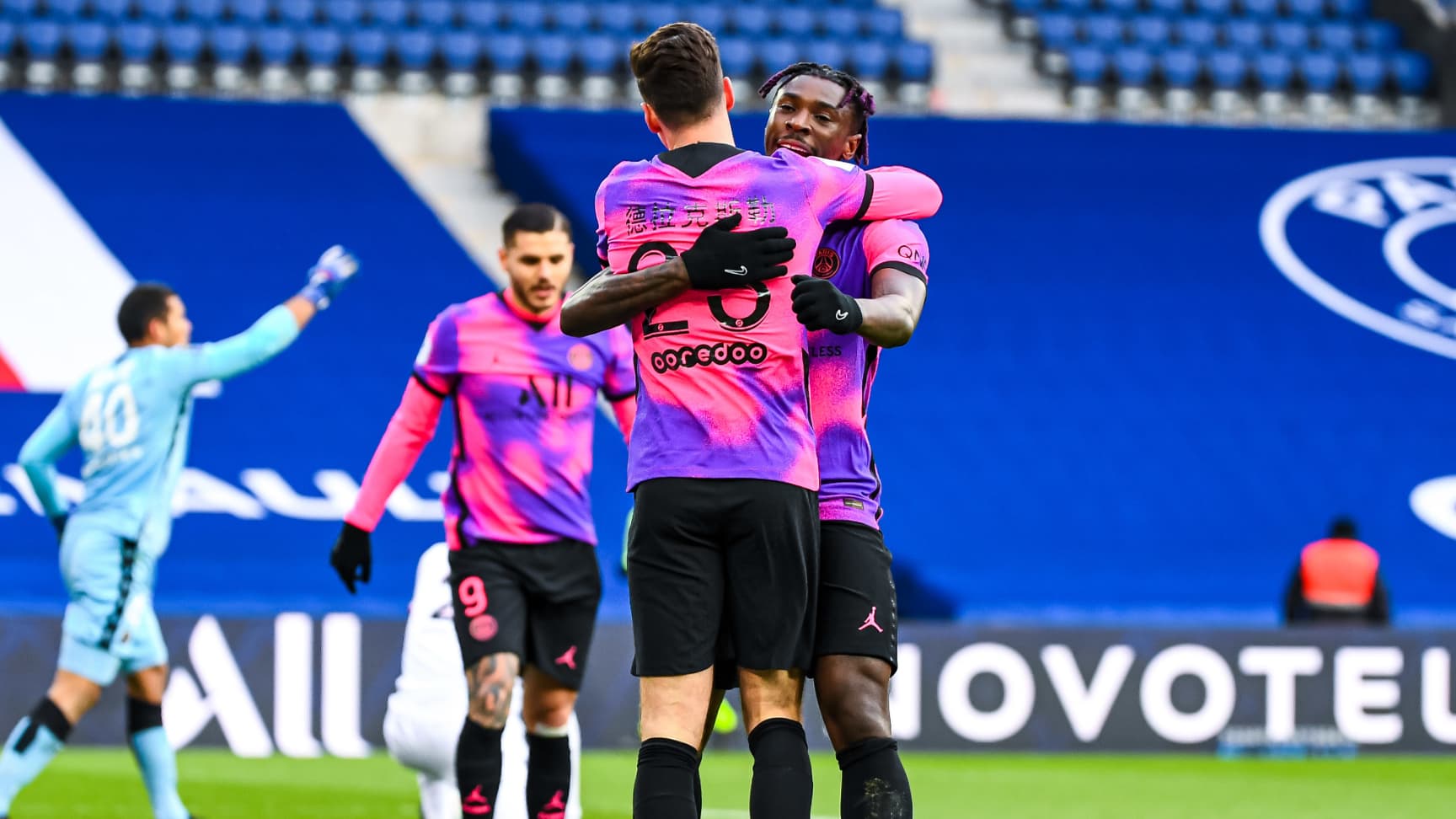 Without Neymar or Angel Di Maria, on Saturday, PSG relied on a late goal from Moise Kean to win 2-1 against OGC Nice in Ligue 1. A victory that gives clues to what Mauricio Pochettino could do against Barça on Tuesday night in the Champions League.

Before the trip to Camp Nou, Paris was scared. He finally comes out with a very positive result. Three days before the long-awaited round of 16 first leg of the Champions League against FC Barcelona, ​​which the injured Neymar and Angel Di Maria will not be able to play, Paris Saint-Germain won 2-1 on Saturday night against OGC Nice at the Parc des Princes. If the European deadline occupies a good part of the Parisian minds, this victory counting for the 25th day of Ligue 1 allows the club of the capital to temporarily recover the first place of the classification. And therefore to put pressure on Losc, tied on points, and Olympique Lyonnais, two lengths away. Nice remains stuck in 13th place.

With his new fluorescent pink-purple fourth jersey, PSG were able to take the advantage in the 21st minute, thanks to Julian Draxler. Taking advantage of injuries to regain playing time, the German attacking midfielder scored his third goal of the season by resuming a shot from Kylian Mbappé repelled by Walter Benitez’s left post. The French striker had been perfectly served by a center from Thilo Kehrer, launched on the right flank by Moise Kean.

Dominated and generally devoid of chances, OGC Nice was able to equalize shortly after the break thanks to a gift from Marquinhos. Unusual because of the fact, the Brazilian captain was guilty of a huge recovery error in his last meters. Upon receipt of this failed pass, Rony Lopes, in full confidence after his double in the Coupe de France, did not procrastinate before sending a mine into the cage of Keylor Navas (50th). The score then fell very quickly, first with a very nice curled shot from Kylian Mbappé, not successful in this match, then a cannonball from Amine Gouiri on the Parisian crossbar. Moise Kean, served by a surrender from Mauro Icardi, finally offered the victory to PSG in the 76th minute.

Even if the intensity was unsurprisingly far from what will be expected in Catalonia, the Parisian performance may have delivered some clues as to what Mauricio Pochettino tactically reserves for Barça. Faced with the absences of Neymar and Angel Di Maria, his two starting wingers, but also that of Marco Verratti, left at rest, the Argentine coach still deployed a 4-2-3-1.

The number 10 position was occupied by Julian Draxler, comfortable in the role in the first half. “I’m better in the middle,” he admitted at half-time on Canal +, he who is often wandered to the sides. To the point of still giving him the keys in Barcelona, ​​bringing Marco Verratti down? In any case, in the pair of axial midfielders, Leandro Paredes, accompanied by Idrissa Gueye, shone in the distribution.

No new injuries to deplore

On the wings, Kylian Mbappé unsurprisingly replaced Neymar on the left, where the Parisian game has largely leaned. On the right, Pablo Sarabia did not start. To better preserve it, with a view to tenure? Whatever the reason, Moise Kean was preferred to him on the right, leaving the axis to Mauro Icardi. The young Italian striker scored points, not only by scoring, but by showing on the opener that his physical qualities could also be used in this position. PSG also played in 4-4-2, with changes in the second half including Moise Kean to the left and Kylian Mbappé to the center. Which supposes that Mauricio Pochettino’s puzzle is still far from being solved.

While waiting to make his last choices to face Barça, the former Spurs technician can be satisfied to have been able to align Keylor Navas, absent recently. He can especially be happy not to have deplored a new injury a priori. However, there was an alert concerning Idrissa Gueye, in the first period. Following a shock in his camp, the Senegalese international remained on the ground and gave the impression of being the victim of a muscular problem. Briefly left the field, he finally quickly returned to the pitch and even played the entire game.