Monalisa latest video: Bhojpuri actress Monalisa is dancing with a nunni, she is injured due to adaa 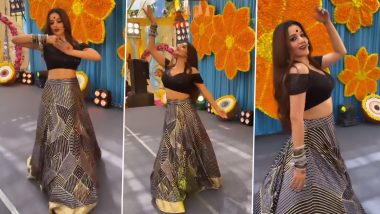 Monalisa Latest Video: Bhojpuri actress Monalisa is looking ready to celebrate Holi festival. The actress recently shared a photo with Bigg Boss 13 winner Siddharth Shukla (Sidharth Shukla) that she is bringing something special to the audience on the festival of Holi. Monalisa, who was shooting for Colors TV’s Holi event, has posted a captivating video on the internet today. In this video, she is seen dancing in her beautiful style.

Monalisa has posted this video of her on Instagram, in which she is seen in a black colored striped lehenga. A lot of people are watching this video on social media and are discussing it. This traditional incarnation of Monalisa, which has a nose in its nose and a forehead on the forehead, is becoming quite viral.

Also read: This photo of Bhojpuri actress Monalisa with Sidharth Shukla has been viral, Holi is going to rock