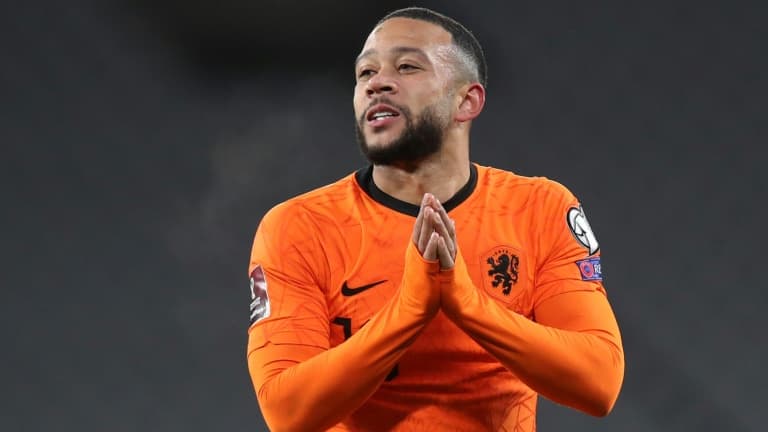 Present at a press conference with the selection of the Netherlands on the eve of Oranje’s second match against Austria this Thursday (9 p.m.), Memphis Depay confirmed that he was negotiating with FC Barcelona and that he would like to play again under the orders from his former coach, Ronald Koeman.

Memphis Depay at FC Barcelona is on fire. At the end of his contract with OL where he has already said his farewells, the Dutch striker is looking for a new base for next season and has been animating the media for several weeks now.

Announced with insistence on the side of Barça, the 27-year-old striker has so far remained very silent about the rumors around his future. Even if the indications about a potential arrival in Catalonia are multiplying.

On Saturday morning, FC Barcelona supporters made an unexpected discovery on the club’s official online store. For a few hours, this gave the opportunity to buy the home shirt for the 2020-2021 season with the printing of Memphis Depay (but without the number).

Simple blunder or real indication of imminent formalization? Still, this error was quickly corrected as FC Barcelona continues to negotiate to secure the services of Memphis Depay. Talks also confirmed by the Dutch striker.

Faced with the press with the selection of the Netherlands on the eve of Oranje’s second match against Austria this Thursday (9 p.m.), Memphis Depay confirmed that he had been negotiating with FC Barcelona for some time now, confident that ‘ he would like to work again under the orders of Ronald Koeman, former coach of the Netherlands.

“Everyone knows that I have been linked with Barca for some time now, and I want to play for Ronald Koeman. Wait, and the news will come,” said the forward, contract-free from June 30.

The coach of Barça remains a big asset in the negotiations and the club culé also relies on his technician to make the difference while the foreign press has however evoked an interest of Juventus, with a much more advantageous financial offer for the player.

While waiting for the soap opera around his future to find a way out, Memphis Depay will once again assume the role of leader for the second match of the Netherlands at the Euro, this Thursday evening (9 p.m.) against Austria.