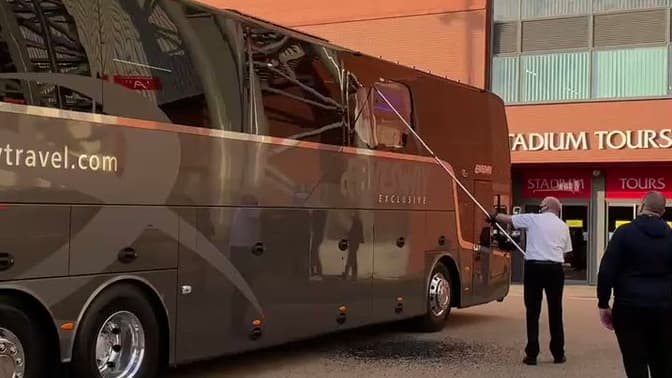 Welcomed near Anfield by projectiles, the Real Madrid bus left Liverpool with a broken window on Wednesday evening. English police have opened an investigation and asked for help from anyone who took videos of the incident.

If Real Madrid left Liverpool with their hopes of winning a 14th Champions League intact, this was not the case with one of their two buses, greeted near Anfield by projectile jets.

On Wednesday evening, the police in Merseyside, the Liverpool region, therefore opened an investigation to find the perpetrators of this gravel which left the Madrid vehicle with one window less, without causing injuries.

“We can confirm that an investigation is underway after the damage to the Real Madrid bus this evening. Despite the instructions given, around 400 people were at Anfield Road and, when the vehicles approached, objects were launched on the Real bus, “said Commissioner Zoe Thornton, quoted by The Guardian.

The Real bus three years after the Manchester City bus

Photos and videos of the incident have circulated on social networks and the police intend to use them to find the culprits. “A team of investigators will study the nearby CCTV images and the images from the cameras carried by the police. […] We also ask all those who took videos of the scene to contact the police, ”added Zoe Thornton.

Liverpool condemned the Madrid bus attack without delay, describing the behavior of “a few individuals” as “unacceptable and shameful”. Eliminated, the Reds could have to leave the wallet if UEFA decides to sanction them as in 2018.

At the time, the paving of the Manchester City bus, in the quarter-finals of the Champions League, had cost 20,000 euros in fine to the club coached by Jürgen Klopp.