Ligue 1: contracts, salary cap … the tracks of the boss of the DNCG to save French football 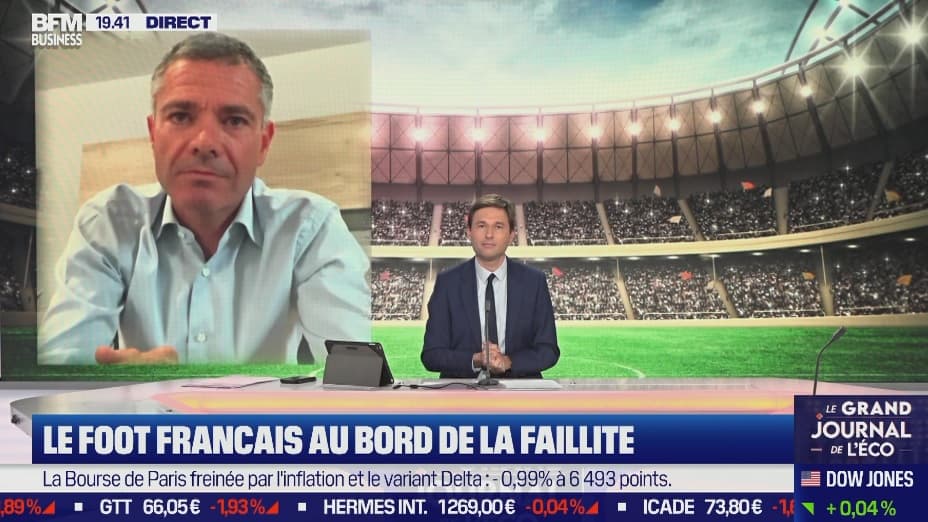 Guest of BFM Business this Thursday, Jean-Marc Mickeler, president of the DNCG, painted an alarmist portrait of French football, currently “to the bone”. He offered solutions to help clubs get by.

President of the National Management Control Department (DNCG), the policeman of French football, Jean-Marc Mickeler is worried about the health of Ligue 1. At the microphone of BFM Business, he called for a change of model, which could impose itself in the coming months: between the imbroglio of TV rights and the coronavirus pandemic, the finances of French clubs are in the red.

You are launching a cry of alarm this Wednesday in the columns of L’Equipe on the financial future of French football. You say in particular that the finances of the clubs are “bloodless”, and that they are “to the bone”. What are the numbers behind these words?

We are talking about an industry which has lost over 1 billion euros in the last two seasons, which has doubled its debt (from 500 million to 1 billion) which presents budgets for the coming season with an imbalance of exploitation, of nearly 1.3 billion, which thinks it can balance that by externalizing capital gains from the sale of players to the tune of 850 million while the market is, as we know, sluggish. We are talking about an industry for which shareholders have mobilized over the past two years, contributing between 700 and 900 million euros. We are therefore talking about an industry that is today shattered and which will no longer be able to continue to be operated with a model which, for us, is outdated today.

How did we come to this? Even before the crisis, were clubs healthy?

The crisis has definitely precipitated the difficulties that already existed. The model of French football before the crisis was based on its ability to sell its players on foreign markets and to balance its accounts with capital gain. But for years there has been a significant operating deficit and they are spending a lot more than they are getting. Mediapro and the Covid have only accentuated this.

Has the state helped clubs enough during the crisis?

The State has mobilized strongly to help this industry, as it has done for other activities severely affected by the crisis. The clubs have benefited from ticketing assistance, tax relief or exemption, and fixed cost assistance. I think the state has fully played its role.

Indeed, but again, the aid was particularly massive during the Covid. Mediapro is an industrial accident, for which the State partially helped by helping the League to obtain its PGE (loan guaranteed by the State), then the shareholders made up the deficit.

How are we doing?

There are solutions. The main problem is the imbalance and inelasticity of charges in relation to recurring revenues. The payroll consumes 90% of recurring income. If you add the amortization of player contracts to salaries, it becomes 100%. Today there are more than 35 contracted players on average per club. To my knowledge, there are only 11 players on the field, it makes no sense to have 35 pro contracts. How are we doing? We reform, we limit the number of players under contract, we introduce a salary cap.

The salary cap, that is to say capping the payroll on the model of American NBA franchises, has been talked about for years. What do you say to those who think it could lead to the mass exodus of the best players?

It is a speech that I have been hearing for years. I have two answers. The first is that the salary cap that we must imagine must be global, not per player, and will allow the club to recruit specific talents and pay them at market price. The second is that I cannot understand the presidents who explain to me that their model is to sell their strong players to foreign players. Do you know a lot of industries that develop their best patents and then sell their patents to the competition every year? How do you imagine that you are going to build the best league in Europe? This is an argument that I have never bought and which I buy even less today, as the ability to sell players has atrophied.

As soon as you think about a new model that is more balanced in operation, you no longer need to sell your best players, you can keep them, create sympathy among supporters, fill the stadiums in a sustainable way, sell products derivatives and that will make you less dependent on audiovisual rights, which is another specificity of football.

After the Mediapro fiasco, Amazon bought the rights for 250 million, far less than the expected billion, and BeIN still has a lot it does not want. How do we get out of the chaos of French rights?

We are still in a state of law. Contracts were signed and legally formed. Nobody forced beIN Sports to list its two championship posters for 330 million euros. No one has stopped anyone from putting a higher price than Amazon’s. A lot of people are talking, a lot of statements are made, but as a legal and numerical professional I am waiting to see. Especially since, to my knowledge, Canal has twice lost in court on similar facts.

Which clubs are most at risk?

You will understand that I cannot express myself and give names. There is a reassuring element: we have mobilized, the League, the DNCG, the State and the shareholders mobilized to secure the coming season and buy time, so that no club is at risk of default here. the end of the championship. This should make it possible to carry out the necessary reforms before next season.

Do you guarantee that there will be no bankruptcy this season?

In the basic assumption, where the TV rights are collected in accordance with the signed contracts and where we are not facing a fourth wave of Covid-19, we can have reasonable comfort on this. Quite simply because we made the shareholders pre-finance all the cash risks borne by the uncertain elements of their budget, in particular the sales of players in future mercatos.

We have just learned that BeIN is suing Canal + …

I still remind everyone that a contract exists between the League and BeIN, and that Canal is a sub-delegatee. What I hear is that BeIN is legitimately attacking its sub-delegatee, who is not fulfilling his part of the contract. But that does not call into question what BeIN must honor with the League.

Would a fourth wave of the pandemic be the final blow to most clubs?

Objectively no. I imagine that the State would continue to support all the affected clubs in this case. But obviously that wouldn’t make it any easier. This will make the completion and implementation of these reforms even more necessary. We all hope that with the health pass, we will succeed in getting people back into the stadium. “