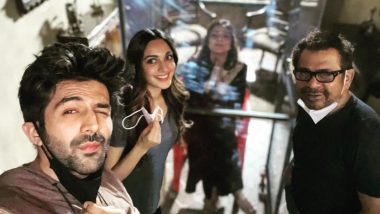 Sit on the set of Bhool Bhoolaiya 2 (Photo Credits: Instagram)

On March 22, as soon as Kartik Aaryan gave information to everyone on social media to be corona positive. Everyone appeared to wish them to be well soon, from fans to celebs. So, the shooting of Karthik’s film Bhool Bhulaiya 2 (Bhool Bhulaiyaa 2) has been stopped for the time being. Karthik shot the film on Sunday. Tabu was also present on the set with him on this day, while on Saturday, Kiara Advani took part in the ramp show with Karthik.

Earlier, Karthik shared a photo on Instagram and wrote that he has come positive and so pray for him. After reading this post, the fans started commenting and writing ‘Get well soon’. Apart from the film Labyrinth 2, Karthik Aryan will also be seen in Netflix’s film Dhamaka. The teaser of this film was released a few days ago, in which he was well liked. Karthik Aryan plays the journalist Arjun Pathak in this film.