Kareena Kapoor and Saif Ali Khan take big decision, will not repeat this mistake with other children! 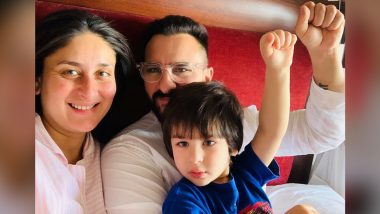 Kareena Kapoor is going to give birth to her second child soon and in such a situation, she and her husband Saif Ali Khan seem fully prepared for this. Saif and Kareena have also made many plans to welcome their second child. Kareena is taking special care from the changes in her house to the health. This couple is already very relaxed for the arrival of their second child, because now they know very well the mistakes they made during the time of Taimur Ali Khan.

Timur Ali Khan has gained much media attention since birth. Even today, media photographers are present there clicking pictures of Taimur wherever they go. In such a situation, Saif and Kareena have already decided about it. In order to take full care of the privacy and security of their second child, they have decided that they will keep him away from the media spotlight.

Also read: Virat Kohli-Anushka Sharma sent this gift to media photographers in happiness of daughter’s birth, in return for this special appeal

According to a report by Bollywood Life, like Virat Kohli and Anushka Sharma, Saif and Kareena have also requested the media to respect the privacy of their child and not take pictures of them. They want their fans to be a part of their happiness as well and hence they will continue to share updates related to it on social media.

In an interview to Times Now recently, Kareena said, “I think I am more confident this time. I was very nervous at the time of Timur’s birth because I was going to be a mother for the first time. This time my The mind is more calm and I will not panic this time.