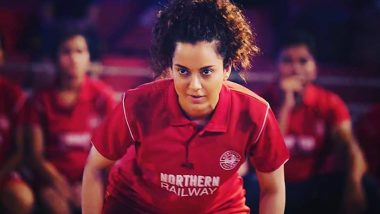 Bhopal, 14 February: The new weapon of political struggle in Madhya Pradesh (Madhya Pradesh) has become the film actress Kangana Ranaut. After the statement about Peasant Movement, the Congress demonstrated in Betul against Kangana for two consecutive days, because the shooting of his ‘Dhakad’ film is going on here. At the same time, the state government is seen standing in support of Kangana. Film actress Kangana Ranaut has been in the headlines for the past few days due to her statements and she made such a controversial statement about the farmer movement that the Congress has become aggressive against her. Kangana’s film Dhaka (dhaakad) is shooting at the Betul table and the Congress demanded an apology from Kangana over her statement, and warned that if she does not do so, a protest will be held against her. In the last two days, when the Congress demonstrated in the table, the police had to use force.

Betul MLA Nilay Daga says that Kangana has insulted the Annadata of the country. She is doing this only because she has the patronage of the BJP and the central government. The Congress has always been fighting against injustice and will continue to fight even further. Former Congress President Arun Yadav says that the table of Kangana Ranaut, who insulted the farmers by speaking Khalistani, lathi-charge on the Congress workers who are protesting in Betul, now can not even talk about the rights of farmers in the country and the state. He further said that the farmers had lathis, walls on the streets, web of sharp cuts and Kangana Ranaut modern Bharat Mata? Is this the country of Jai Jawan and Jai Kisan? ALSO READ: Congress Threat: Youth Congress threatens Kangana Ranaut, said-Apologize to farmers otherwise they will stop shooting

On the one hand, while the Congress is preparing to chalk out a strategy against Kangana on the road and register a strategy for the statewide movement in the coming time, the state’s home minister, Dr. Naretam Mishra, says that we should not disturb the peace of Madhya Pradesh. Whatever it is. Kangana Ranaut sister should be absolutely relaxed. Political analyst Shiv Anurag Pateriya on the politics of Kangana in the state says that Kangana, BJP and Congress are showing their interests. Kangana wants to become the queen of controversies through statements, she knows that by doing this one class will be with her and the other in opposition, the same is happening. When Kangana gave a statement on the farmers, the Congress came out in protest and the BJP is supporting Kangana. Overall, all three are seeing their own benefits, in fact they have nothing to do with the core issues.