Jimmy Neesham’s big prediction regarding IPL 2021, said- this year I don’t think IPL will be able to happen again in India this year: Neesham 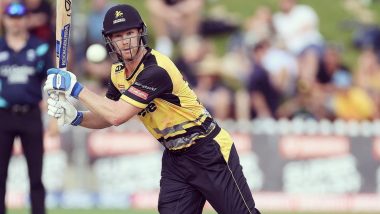 Christchurch: New Zealand all-rounder Jimmy Neesham does not think that the remaining 31 matches of the Indian Premier League (IPL) will be held in India this year. The tournament was postponed after Covid-19 cases were found inside the IPL’s bio-safe environment. Neesham is also skeptical about the T20 World Cup being held in India later this year. IPL 2021: BCCI President Sourav Ganguly made a big statement about the remaining matches of the IPL

India is still struggling with the second wave of Kovid-19. More than four lakh cases are being reported in the country every day whereas more than 4000 people are dying every day. In such a situation, both the IPL and the T20 World Cup are likely to be held in the UAE. Neesham told NewsHub, “If the IPL starts again, I don’t think it will be organized in India.” ”

Neesham, who played for Mumbai Indians in the IPL, said, “We are hearing about the plans to hold the T20 World Cup to be held at the end of this year outside India and they are very cautious about these things. Neesham feels that the entry of the virus into the bio-safe environment (bio bubble) may be the reason for the teams traveling across the country.

He said, “Even though we were going in chartered planes, but we had to go through all the formalities which always had the possibility of danger.” Neesham said that it is difficult to say how the bio bubble was violated.

He said, “We don’t really know clearly how the teams got infected.” It is very difficult to keep all things fine when there are so many people around you who are close to each other and after the matches there was a conversation among themselves. ”

Neesham said, “When a case is found in a team, then you start wondering who you met last week. Whom did you shake hands with? Your mind seems to run really fast. “The IPL was postponed to indefinitely last Tuesday after four players and two coaches from different teams were found positive for Kovid-19.