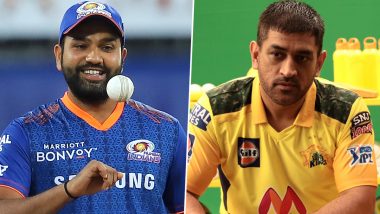 Chennai: In the 9th match of IPL 2021 (IPL), there was a match between Mumbai Indians and Sunrisers Hyderabad (MI vs SRH) on Saturday. In this match, Mumbai won the toss and decided to bat first. For Mumbai, their captain Rohit Sharma has achieved a big record in this match. Rohit Sharma has also left CSK captain MS Dhoni (MS Dhoni) behind. Rohit hit two fours and an equal number of sixes in a 25-ball 32-run innings. IPL 2021 SRH vs MI: Many big records can be made in today’s match, Rohit Sharma-David Warner can create history

Let us know that Rohit Sharma has become the Indian batsman to hit the most sixes in the history of IPL. Rohit hit two sixes in the match against Hyderabad. As soon as he hit the second six of his innings, then he made this big record in the IPL. Rohit now has 217 sixes in his name. Mahendra Singh Dhoni has 216 sixes in his name. At number three is Virat Kohli, who has 201 sixes. At the top of this list is Chris Gayle, the explosive batsman of Punjab Kings. Gayle has applied 351 sixes so far. AB de Villiers is at number two after hitting 237 sixes.

This is the third match between the two teams. Mumbai won the toss and scored 150 runs after losing 5 wickets. Quinton de Kock scored the most runs for Mumbai. For Hyderabad, Vijay Shankar and Mustafizur Rahman took 2–2 wickets. Mumbai won this match by 13 runs. This is Hyderabad’s third consecutive defeat in this season.