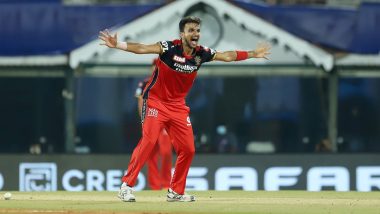 Chennai: Royal Challengers Bangalore (RCB) captain Virat Kohli praised the bowler Harshal Patel, saying that this fast bowler has clarity in his thinking and he knows very well why the franchise has associated him with him And he is trying to give exactly that. After Friday’s match with Mumbai Indians, Virat Kohli said, “We got Harshal in trade from Delhi.” He is accepting the responsibility again and is clear with his plans. Today they made a difference. He is going to be our death over bowler. As a captain you want a player with clarity, and he has that. “IPL 2021: Virat Kohli sets world record, becomes first captain to do so in T20 cricket

Harshal took five wickets for 27 runs in this match. In the final over, Harshal took three wickets. Mumbai’s four wickets fell in this over. There was a run out. Virat Kohli also praised his other bowlers – Mohammad Siraj and Kyle Jamieson. Both kept the economy rate very good and did not give the batsmen a chance to bowl.

Jamieson started well. Yuzvendra Chahal and Siraj also did well. The RCB captain, who scored 33 runs from 29 balls, said that it was important to face MI as an opener in the tournament as the team informed him of the options that he had.

Kohli said, Our team’s performance was important while playing against the strongest side in the competition. Everyone was involved in this game, and when you win by two wickets, it means that everyone has contributed. There are too many options for me. “