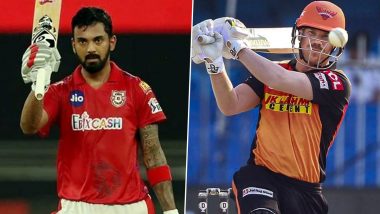 Chennai: IPL 2021 (IPL) will be played on Wednesday between Sunrisers Hyderabad (SRH) and Punjab Kings (PBKS) in Chennai. Two matches will be played today. The first match will be from 3.30 pm. Both teams are currently at the bottom of the points table. The Hyderabad team has lost three matches and is at the bottom of the points table, while the Punjab team is in seventh position with two points and two wins in three matches. IPL: These 3 uncapped players of India have set the fastest half-century in the IPL.

Both teams would like to break their respective defeats through this match. Talking about the head-to-head competition of both the teams, so far 16 matches have been held between the teams of Punjab and Hyderabad, in which Warner’s team has won its dominance by winning 11 matches, while Punjab has only 5 wins.

Everyone will be watching these players in this match

The bat of Sunrisers Hyderabad captain David Warner has not done much yet. Hyderabad have lost all three of their matches. In such a situation, it is very important for captain David Warner to be in good form. If SRH loses even today, then it will be difficult for them to make a place in the playoffs. In today’s match, everyone’s eye will remain on Warner.

This explosive batsman from England has not shown his fire yet. Today there are many expectations from Johnny Bairstow as well. It would be a positive sign for Bairstow to come in form.

Despite being in good form, Punjab Kings captain KL Rahul is in seventh place in the points table. In this match, Rahul will have to do better for the team. Everyone will be watching KL Rahul in this match.