IPL 2021 PBKS vs RCB: Today RCB and Punjab Kings will have a tough competition, these players will be seen 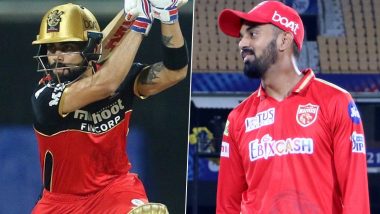 Ahmedabad: Royal Challengers Bangalore (RCB) will face Punjab Kings (PBKS) on Friday in the 26th match of the Indian Premier League (IPL). Punjab’s team are ranked sixth in the points table with four points from four defeats and two wins, while RCB have won five matches and are in third place with 10 points. Apart from the loss to Chennai Super Kings (CSK), RCB has continued to dominate every team this season. All the RCB batsmen are running in excellent form. IPL 2021 RCB vs PBKS: Punjab Kings need to do their best to overcome RCB

Talking about Punjab, no batsman has done well so far, except KL Rahul and Mayank Agarwal. In six matches, the team led by KL Rahul scored a low score of 106, 120 and 123, batting first in three matches, Rahul has so far taken the responsibility of batting for his team. Mayank Agarwal has not been able to take advantage of a good start, while Chris Gayle has bat in only two of the six matches.

All eyes will be on these players

RCB captain Virat Kohli is making a great debut with Devdutt Padikkal, which helps the batsmen of the middle order a lot. Virat Kohli’s bat is going on from time to time. In this match too, everyone’s eyes are on Virat Kohli.

Punjab captain KL Rahul’s bat is rocking. Rahul is in good form. Rahul has so far taken the responsibility of batting on behalf of his team and they will be hoping for a good start to the team again. All hope of Punjab rests on KL Rahul. In this match too, all eyes will be on KL Rahul.