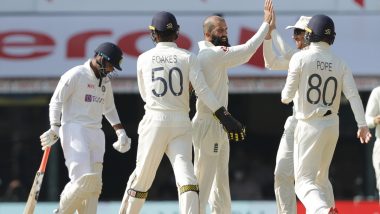 Ind vs Eng 2nd Test Match 2021: Chennai vs Chennai MA between India vs England cricket team. Team India managed to score 329 runs in the first innings of the second Test match being played at the Chidambaram Stadium. In the first innings for the team, opener Rohit Sharma played the most century of 161 runs. Sharma hit 18 fours and two sixes during his great innings, facing 231 balls.

Apart from Rohit Sharma, in the first innings for the Indian team, Shubman Gill scored a three-ball zero, Cheteshwar Pujara scored a 58-ball 21 with two fours, captain Virat Kohli scored a five-ball zero, vice-captain Ajinkya Rahane hit nine fours in 149 balls. 67 with the help of, wicket-keeper player Rishabh Pant scored 57 not out with the help of seven fours and three sixes in 77 balls, Ravichandran Ashwin 13 with a four in 19 balls, Akshar Patel five with a four in 14 balls, Ishant Sharma scored zero in two balls, Kuldeep Yadav scored zero in 15 balls and Mohammad Siraj scored four runs with the help of one four in two balls.