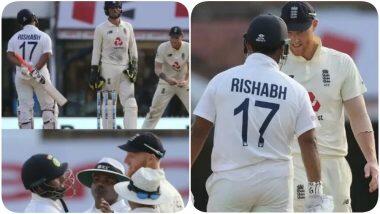 Ind vs Eng 2nd Test Match 2021: Chennai vs Chennai MA between India vs England cricket team. On the first day of the second Test match being played at the Chidambaram Cricket Stadium, the ground between Indian wicketkeeper player Rishabh Pant and the wicketkeeper of the opposition Ben Fox (Ben Foakes) was seen in the ground. This incident was seen when the captain of the opposition team, Joe Root, was bowling. Ben Fox was constantly commenting on Pant from behind the wicket, due to which he got angry and stood in the middle of the wicket and started staring at him. During this time, Captain Root also said something while passing by Pant, which further aggravated him and the on-field umpires had to intervene and explain to Pant and other players. During this controversy, the vice-captain of the opposition team, Ben Stokes, was also seen in the field explaining Pant.

Talk about the second Test match, the Indian team won the toss and scored 300 runs at the loss of six wickets while batting on the first day. For the team, Rishabh Pant is unbeaten in 56 balls with five fours and a six with the help of 33 and Akshar Patel scoring five runs with the help of a four off seven balls.

The players who got out in the first innings for India are Rohit Sharma, Shubman Gill, Cheteshwar Pujara, Captain Virat Kohli, Vice Captain Ajinkya Rahane and Ravichandran Ashwin. Sharma got out for 161 runs in 231 balls with the help of 18 fours and two sixes.

Ben Fox 4, son, his name is Rishabh Pant @ RishabhPant17 is . Don’t mess with him. He will make your Gauri Gauri from behind not only on the wicket, but on the wicket. #INDvENG #ENGvIND #RishabhPant pic.twitter.com/ArLXxg3EtJ

At the same time, Gill was out for three balls, Cheteshwar Pujara 21 off 58 balls, Virat Kohli five balls, Ajinkya Rahane 149 balls with nine fours, 67 and Ravichandran Ashwin 13 runs in 19 balls.