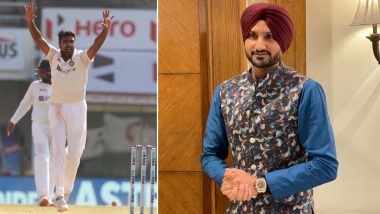 Ind vs Eng 2nd Test Match 2021: In the second Test match between India vs England cricket team being played in Chennai (Chennai), the experienced Indian spinner Ravichandran Ashwin bowled the vice-captain Ben Stokes on the individual score of 18. The veteran spinner Harbhajan Singh (Harbhajan Singh), who is running out of Team India, has named a big record. Yes, Ashwin has left behind Harbhajan Singh in Test cricket taking the most wickets at home.

Talk about Ravichandran Ashwin at the same time, he has written news in the 141st innings of 75 Tests for the country till he has taken 390 wickets. In Test cricket, Ashwin has a name for taking five wickets 28 times and 19 wickets four times. His personal best performance in Test cricket is seven wickets, spending 59 runs.