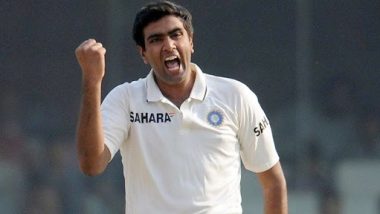 Chennai: The pitch of Chepauk, which is considered to be difficult to bat on, hit Ravichandran Ashwin at number eight and later hit England’s top order with Axar Patel, India won here in the second Test cricket match on Monday. India made 286 runs in their second innings and set a difficult target of 482 runs in front of England. England have scored 53 for three in their second innings by the end of the third day’s play. He is currently 429 runs away from the target with two days left in the game. India scored 329 runs in the first innings and bundled England out for 134 runs.

Ashwin took an advantage of two lives and played an attractive innings of 106 runs, which is the fifth of his career and the first century on his home ground. After losing five wickets early in the morning session, Ashwin shared a 96-run partnership for the seventh wicket with captain Virat Kohli (62 off 149 balls). He added 49 runs for the last wicket with Mohammad Siraj (16 not out) and meanwhile completed his century.

For England, off-spinner Moeen Ali (four for 98) and left-arm spinner Jack Leach (four for 100) took four wickets each. Oli Stone bowled Ashwin to end the Indian innings. India started to play ahead by 54 runs for one wicket in the morning. He also scored 102 runs, losing five wickets in the first session. In the second and third seasons, especially the tail batsmen added 65–65 runs. England have a bigger challenge than conquering Everest and on the other hand, they did not have a good start. Dom Sibley (three) struggled for only eight overs. Also read: Ind Vs Eng 2nd Test 2021: Shane Warne’s befitting reply to those who criticized the Chennai pitch, this tweet to the English team for a long time

Akshar Patel (two for 15), who started bowling with Ishant Sharma, dismissed him lbw. Ashwin (one for 28) took the ball in the fourth over after scoring a century and put an end to the struggle of opener Rory Burns (25). Sending Jack Leach as a nightwatchman did not work. Patel drove him as soon as he came. Dan Lawrence was playing 19 and captain Joe Root for two at stumps. Ashwin took over after Patel (seven) was dismissed and batted positively. Meanwhile, fate also supported him. Stuart Broad, who came out to bowl in the 45th over of the innings, would have taken Ashwin’s wicket in the same over but Ben Stokes gave up an easy catch in the slip. Ashwin was then 28 runs. After this, Ashwin was given life by wicketkeeper Ben Fox on a personal total of 56 runs.

Kohli batted steadily but in the meantime made some spectacular drives and completed his 25th Test half-century. Moeen ended Kohli’s brilliant innings. On the successful appeal of his footsteps, Kohli also took a review but the decision went against the Indian captain. Kohli played 149 balls and hit seven fours. Moeen dismissed Kohli for the fifth time and the second time in the match. But Ashwin not only sustained but also scored runs. When India’s ninth wicket in the form of Ishant Sharma (seven) fell, Ashwin was playing on 77 runs, the century seemed far-fetched but Siraj supported him well.

Ashwin started to play long shots. He reached Moin for 99 with a six on ‘Cau Corner’ and in the same over, he completed his hundred with fours, scoring a century and a five-wicket haul in the innings for the third time in his career. Only Ian Botham (five times) is ahead of him in this matter. Ashwin played 148 balls in his innings and hit 14 fours and a six.

However, seeing the status of the morning session, it was not felt that India would be able to set such a big target. Cheteshwar Pujara (7) was run out in the first over of the day. He came forward to flick the leech ball but could not reach the crease at the right time. Rohit Sharma (26) was stumped by Fox and then Rishabh Pant (eight) was given the go ahead and punished him for a shot. Ajinkya Rahane (10) took two good shots before being caught at short leg off Moin Ali. England are still 1-0 ahead in the four-match series.

(This is an unedited and auto-generated story from a syndicated news feed, there is a possibility that it has not been altered or edited by the latest staff)