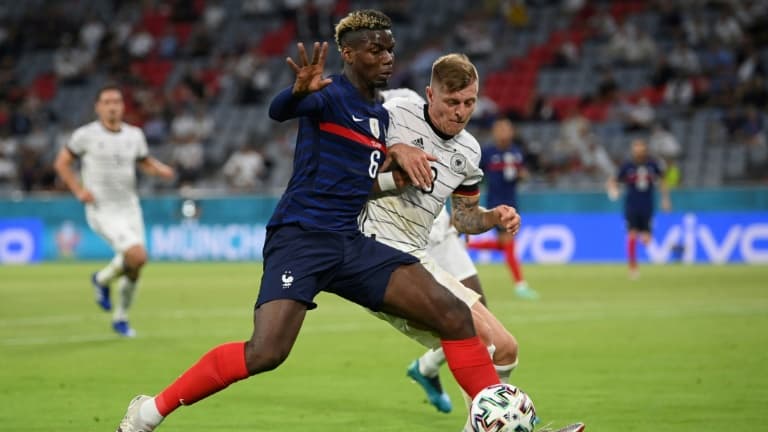 On RMC Friday, Jérôme Rothen and Jean-Michel Larqué returned to Paul Pogba’s current level of play with the France team. They believe that “the Pickaxe” offers its best football today, and that the difference in level compared to Manchester United can be explained by the environment of the club.

Is Paul Pogba at his best? Jérôme Rothen and Jean-Michel Larqué wondered about RMC, three days after the 28-year-old midfielder’s man of the match performance in the France team’s 1-0 victory over Germany .

“He is a player who knows how to do everything. He is part of the big category. (…) He has found his job. He has his role in the group, he is a real leader. With Didier Deschamps, there is an affectionate relationship. They appreciate each other a lot, and that helps his fullness. We feel Pogba totally liberated and happy, “said Jérôme Rothen.

Jaen-Michel Larqué, who has long been annoyed by certain aspects of Paul Pogba’s game, is now conquered: “For me, it’s not the same Pogba who started in the France team. It was not to use his strengths, that is to say the power, the ability to recover balls easily and to throw himself forward in an extraordinary way. When he takes the ball and the pushes, the others are behind and only see the number “.

“Fulfillment in a club can be different”

“Today, Paul Pogba’s game is magnificent, adds Jean-Michel Larqué. He had an exceptional match against Germany. He does not make any unnecessary gesture that he sometimes did. It gave him small problems. ‘hui, his game is simple, stripped down, made of power and his strengths. (…) Pogba has become a player of great international class. Very few are able to compete with him “.

As for the difference in level that Paul Pogba displays between the selection and Manchester United, Jérôme Rothen has an explanation: “The daily fulfillment in club can be different. In Manchester, we always say that it is the player’s fault . But this is not always the case. It also depends on the supervision, on how you use it. There have been changes of coaches, and we cannot say that it happened in a very stable club. Paul Pogba as he is, because he’s a great player, he doesn’t have to be above everyone in every game “.