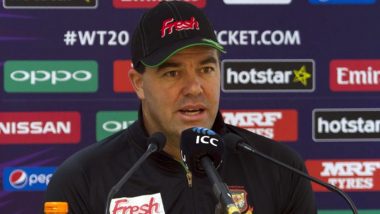 Let us know that Heath Streak, one of the greatest all-rounders of Zimbabwe, was under suspicion in many matches between 2017 and 2018. As a coach, he was accused of violating the Anti-Corruption Code in many bouts. Former Zimbabwe captain Heath Streak has been banned from all cricket for eight years after admitting five charges of breaking the ICC Anti Corruption Code.

Former Zimbabwe captain Heath Streak has been banned from all cricket for eight years after he accepted five charges of breaching the ICC Anti-Corruption Code: International Cricket Council pic.twitter.com/S1NuVOZAQ2

These matches also include International Cricket, IPL, Bangladesh Premier League and Afghanistan Premier League matches. Heath Streak also appealed against the allegations on himself, but ultimately he admitted his mistake. Now Heath Streak will not be able to participate in any cricket activity for 8 years. Streak was also accused of promoting betting.

Heath Streak was the best bowler to play for Zimbabwe. Also, he is the only Zimbabwe bowler who has taken more than 100 Test wickets.

Let us know that Heath Streak took 239 wickets and scored 2943 runs in 189 ODIs. Streak played his last ODI in 2005. He was counted among the finest bowling all-rounders in the world. Streak played 65 Tests in his career and has taken 216 wickets. Apart from this, he has also scored 1990 runs in 65 Tests with 1 century and 11 half-centuries.