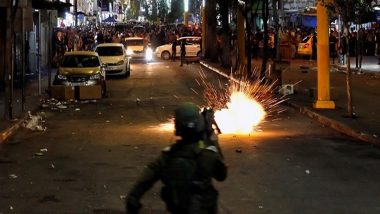 Hospitals are flooded with people killed and injured in Israeli bombings. Many important medicines are ending fast in this small area. Two of Gaza’s most eminent doctors were killed. Their houses were demolished during the fighting that began 10 days ago between Hamas and Israel.

The only laboratory to test for infection in Gaza, which is suffering from a second wave of Corona virus infection, was damaged in airstrikes and has been closed. Health officials fear the spread of infection among thousands of displaced residents living in makeshift camps.

Nawal al-Danaf and his five children live in the same room with five other families in a United Nations-run school. 1,400 people have taken shelter in this school. Al-Danaf, who fled Israel’s bombardment of the city of Bait Lahia in northern Gaza, said, “The school is safe from war but when it comes to Corona, there are five families living in one room, each infecting each other.” Can do.”

Adnan Abu Hasna, the media adviser of the UN agency UNRWA, said that the health infrastructure of the Gaza Strip was collapsing even before this war. During the first three wars between Israel and Hamas rulers of Gaza, hospitals and clinics were damaged and medical personnel were killed. Now the health care centers are battling to treat the casualties of the war and to meet the daily needs of 20 million people of Gaza.

Gaza health officials said at least 227 Palestinians, including 64 children, were killed and more than 1,600 were injured in the airstrikes. 12 people lost their lives in Israel due to rocket attacks.