Euro 2021: where does the heady come from "Football is coming home", the anthem of the English supporters? 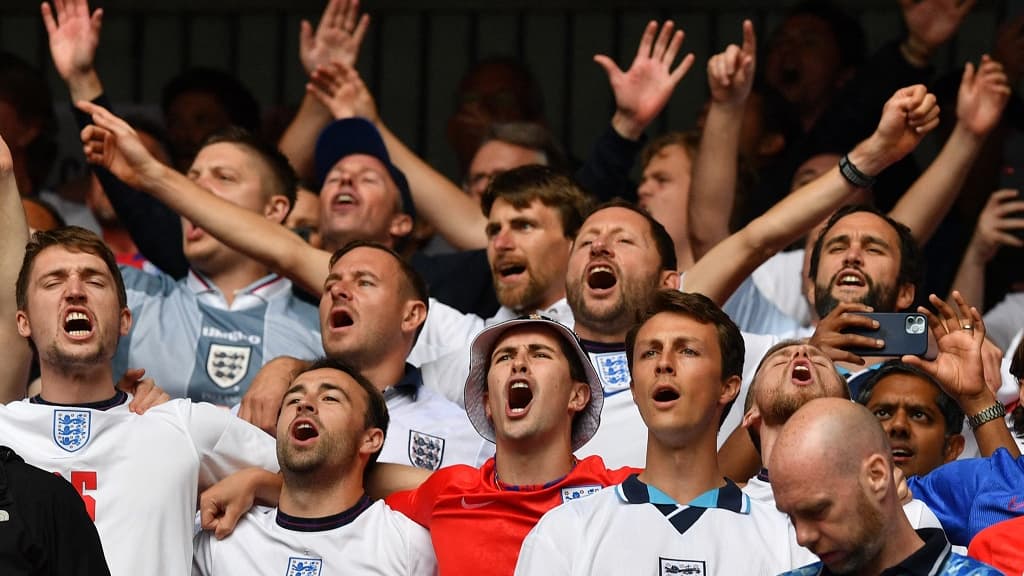 Composed in 1996 and full of self-mockery, the song “Football is coming home” is the slogan of the English fans and of an entire nation. But he could be replaced if the Three Lions win at Euro 2021 …

A catchy tune, a refrain repeated over and over and then a good dose of British self-mockery. This is the recipe for “Football’s coming home”, a stainless anthem of the English since 1996, but which could well be exceeded at the end of this Euro 2021. “Thirty years of hardship have never had me. kept dreaming. So many jokes, so many taunts. But all those “oh, we were almost there” end up weighing, over the years, “says this bittersweet song, on perky chords.

Written at the request of the English Football Federation in 1996, to support the organization of the Euro in the homeland of football, it still resonates, 25 years later, before the selection matches at Wembley in this Euro. While the battle of the “Britpop” (English pop) divided the country and the world between fans of Blur and Oasis, the group The Lightning Seeds had been chosen for this mission in the service of the nation. Contrary to the bellicose or rosy songs sometimes sung by English supporters, such as “No Surrender to the IRA” or “Ten German Bombers”, the group’s composer, Ian Broudie had chosen a humorous, almost parody note.

“I didn’t want the song to be ‘Angleterrist’ or nationalist,” he explained to the Guardian in 1994. He wanted a song that “was more about what it is to be a supporter, which at 90% , is to lose. Most of a life of a supporter is made of disappointment, “he added. He had thus refused that players sing with the group, instead enlisting David Baddiel and Frank Skinner, two actors in the comedy series “Football Fantasy League” on the BBC. The success was immediate. “It’s friendly, people care, there’s that huge repetitive ‘It’s coming home’ catchphrase that has practically become a slogan for every tournament. It’s full of tongue-in-cheek English humor, the rhymes are simple, there’s a big chorus, and the lyrics are made so that anyone feels like even bawling it out, they’re going to be singing pretty much right, “Skinner added in a podcast in 2019.

The competition of “Sweet Caroline”

The song was so popular with the players that Paul Gascoigne, the eccentric leader of the Three Lions at the time, refused to get off the team bus until it had been played fully, he said. Even the adversaries were won over. Jürgen Klinsmann had revealed that the Germans sometimes sing it when going to matches. “Football is coming home” unfortunately also proved to be premonitory. “Everyone knows the result, we have already seen it a thousand times, we know very well, we are sure, that England will spoil everything, will screw everything up”, she announced even before the disillusionment in the semi-final, on penalties, against Germany, future winner of Euro 1996. This did not prevent the song from becoming number 1 in sales or downloads – the only Lightning Seeds number 1 in six albums recorded -, especially during the fantastic course of the 2018 World Cup, also interrupted before the final. A resurrection from which the authors and performers benefit very little.

“I saw an article that said the song had something like 16 million plays in 2018 until the (quarter-final) England-Colombia, which made us 900 pounds (1000 euros) to share. three with Frank (Skinner) and Ian Broudie, “Baddiel told a radio show in 2019. The future of the ritornello is threatened, however. Sneakily, she begins to be replaced, especially at the end of the match, by “Sweet Caroline” (Douce Caroline) by Neil Diamond and his much more optimistic words: “Sweet Caroline, never have the good times seemed so good”, resumed loudly by Wembley. And above all, with a semi-final to play (against Denmark this Wednesday at 9 p.m.) in a Euro that seems within their reach, then a possible final still at home what would happen if, luckily, England ended up to win ? Already re-recorded in 1998 and 2010 to update the lyrics, it would probably only be left to write “football has finally come home”.