The Indian Paper
HomeWorldChina is not deterred by its antics, violated the agreements again, know...
World
May 21, 2021

China is not deterred by its antics, violated the agreements again, know what the foreign minister said 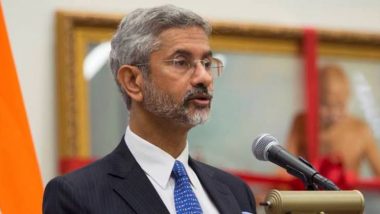 New Delhi: Foreign Minister S Jaishankar has said that relations between India (India) and China (China) are standing at a crossroads today and which direction it will go, depending on whether China agreed in 1988 Follows or not. In fact, Foreign Minister S Jaishankar said in a communication organized by the media that if there is unrest, bloodshed and bullying and confrontation at the border, then it will definitely have an impact on bilateral relations. He said that China should not think that relations in other areas can be carried forward by ignoring the reality of tension and conflict on the border. Blaming China for the conflict and tension on the border, he said that China has broken the mutual agreement due to which relations have deteriorated. India-China Tension: Tensions over LAC reflect growing Chinese aggression and tendency to dominate

The Foreign Minister gave the background of the recent India-China dispute and said that it took 26 years to break the deadlock after the 1962 war. After 1988, agreements were made between the two countries in 1994 and 1996 to create peace and normalcy on the border. The Foreign Minister said that China violated these agreements, which provided that large-scale troops would not be deployed in the border area.

Foreign Minister S Jaishankar reminded China that it was only after the implementation of the previous consensus that it was possible that trade between the two countries and relations in other areas developed. In the current era, when peace and stability were breached on the border, it was bound to have an impact on other areas as well.

During this time, the Foreign Minister once again clarified that there is no quadrant military alliance emerging in the Indo-Pacific region. He said that many people have not yet emerged the mindset of the Cold War. He said that today’s world is completely different from the world of Cold War. The reiteration of the Cold War is not based on reality.

Elucidating India’s engagement with the Quad, he said that India is resorting to various options to promote its interests. India believes in a multi-polar world and is ready to work together with like-minded countries. He disagreed with the idea of ​​some US defense experts that the Quad is a military alliance being built to keep China under control.