Chandra Grahan 2021: Supermoon, red blood full lunar eclipse, all happening at once, but what does it mean? 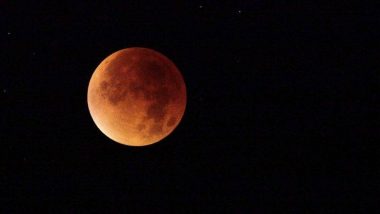 Detroit (United States), May 22 (The Conversation). The first lunar eclipse of this year will be in the early hours of 26 May. But, this will be a special phenomenon as there will be a supermoon, lunar eclipse and red blood moon in one go. So what does it mean? What is a supermoon? When circling the Earth, a situation arises when the Moon is closest to the Earth, ie the shortest distance. During this time, its distance from the closest point in the orbit is about 28,000 miles. This phenomenon is called supermoon, what does super mean in it? When approaching the moon, it looks big and bright in size. By the way, it is difficult to find any difference between a supermoon and a normal moon unless you look at the pictures of both the positions from the side. Also read- Chandra Grahan 2021: The first lunar eclipse of the year on May 26, a rare sight of Super Blood Moon will be seen in the sky.

What is meant by lunar eclipse A lunar eclipse occurs when the moon is completely or partially hidden in the Earth’s shadow. This phenomenon occurs during the full moon. Therefore, first try to understand the full moon moon. Like the Earth, half of the moon is illuminated in sunlight. The position of the full moon is formed when the moon and the sun are on opposite sides of the earth. This makes the moon look like a saucer at night. In each lunar orbit, the Moon is on the same horizontal plane as the Earth and the Sun twice. If it matches the full moon, then the sun, earth and moon come in a straight line and the moon will pass through the earth’s shadow. This leads to a full lunar eclipse.

Why does the moon look red?

When the moon is completely covered in the shadow of the earth, it becomes dark but not completely dark. Instead, it looks red, so a full lunar eclipse is also called red or blood moon. Sunlight has all the colors of visible light. While passing through the Earth’s atmosphere, the blue light is filtered while the red part passes through it. Therefore, the sky looks blue and redness prevails at sunrise and sunset. In case of lunar eclipse, the red light passes through the earth’s atmosphere and it turns towards the moon while the blue light remains out of it. This makes the moon look completely red.