Boxing – Oubaali: "This defeat will make me grow" 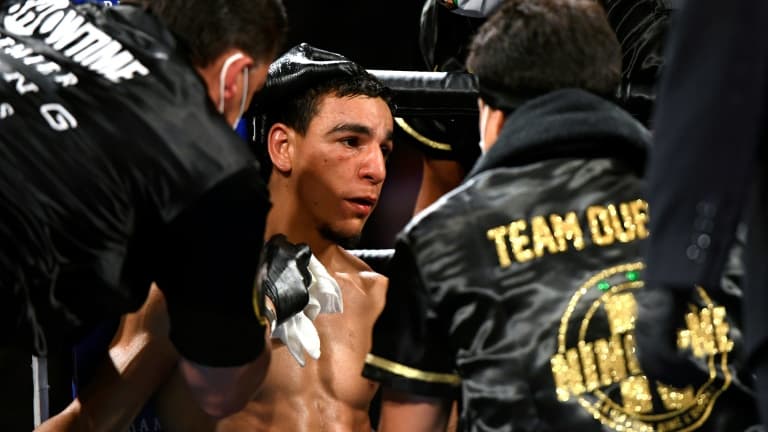 Opposed to legend Nonito Donaire at the end of May in California, Nordine Oubaali suffered the first defeat of his professional career and abandoned his WBC belt of roosters. Which in no way detracts from an exceptional course that is still far from over. The French boxer chose the RMC Fighter Club to come back in detail, with his brother-coach Ali, on this frustrating setback given the circumstances but from which he intends to learn lessons to bounce back.

As usual, the approach to his fight has taken a road strewn with pitfalls. An appointment postponed several times, the consequences of the Covid, a visa for the United States for which we had to move heaven and earth despite his status as world champion … As too often in his career, because it is a bit The story of his destiny, Nordine Oubaali did not know the ideal preparation before putting his WBC cocks belt back on the line against the legend Nonito Donaire, world champion in four categories, at the end of May in Carson (California).

But no question for the French boxer to hide behind an apology when commenting on his defeat against the Filipino, winner by KO in the fourth round after having sent him to the ground twice in the previous round. Not the kind of house. Nordine Oubaali prefers to learn the lessons that have allowed her to grow. “It’s sport,” he says with a grin that confirms an always enormous appetite.

Having become world champion by beating an American (Rau’shee Warren) in Las Vegas before defending his belt against a then undefeated Japanese (Takuma Inoue) in Japan, “Nono” will get up, work and continue his journey. But before moving on, the now former WBC roosters champion stopped by the RMC Fighter Club studio to recount in detail this fight against Donaire.

>>> Long format: Nordine Oubaali, the steel mind of a too forgotten champion

Accompanied by his coach and big brother Ali Oubaali, Nordine answers all questions from Souleymane Cissokho (who shares their Top Rank Bagnolet room when he trains in France), Jonatan MacHardy and Alexandre Herbinet to better understand this defeat, the first of his professional career (17-1), and to project himself towards a future that he quickly hopes to see synonymous with new world opportunity. “Victory loves effort”, he often repeats as a credo of life. Nordine Oubaali has not finished doing it. And not finished getting some.