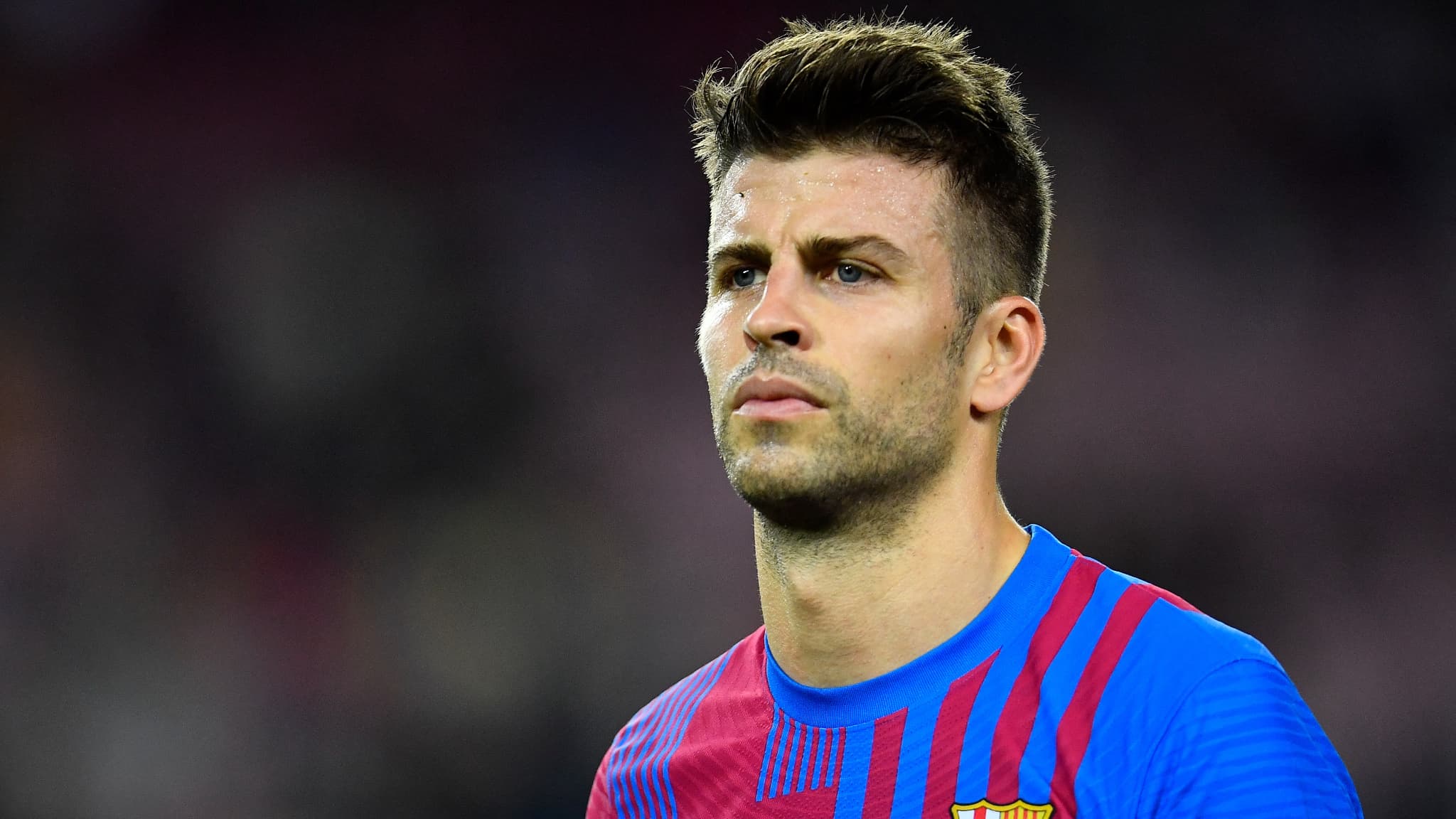 Gerard Pique is having a bad week after the newspaper El Confidential published tapings and telephone conversations with Spanish football federation president Luis Rubiales alleging conflicts of interest and petty arrangements. They are particularly accused of pressure to organize the Spanish Super Cup in Saudi Arabia, to compete in the Tokyo Olympics last summer, or to facilitate their Andorran club’s progress in the third division.

To use a contemporary expression, Gerard Pique is “in sauce”. FC Barcelona’s central defender has come under fire from critics this week after the publication of an investigation by the newspaper El Confidential. From a massive commission collected to organize the Spanish Super Cup unveiled last Monday to the unveiling of yet another embarrassing conversation with Federation President Luis Rubiales this Thursday, the story of a week has twists and turns.

The first bomb was dropped on Monday 18 April by the daily El Confidential. Through his company Kosmos, the player will cash a check of 24 million euros to help organize the Spanish Super Cup in Saudi Arabia, signed for eight years against 240 million euros (40 million per season) in November 2019. is a contract. Information proven by exchanges between Gerard Pique and the President of the Spanish Federation, Luis Rubiales.

“Gerry, congratulations. And I’m not referring to yesterday’s match. I mean it’s midnight and the deal has been signed with Saudi Arabia,” the leader said in a conversation allegedly thrown by the defender. Said after. “Let’s see Ruby, if it’s a question of money, if they want eight million, crap, man, they give Real eight and Barca eight, they sent first. Take the other two and a million. Then you six for the Federation keep.”

El Confidential also learns that the two men initially wanted to organize the tournament at Camp Nou. One way to put pressure on Real Madrid is to admit the Madrid club turn to Saudi Arabia.

The RFEF reacted quickly by calming things down with statements to Marka. “The information does not bring anything new to be published in 2019,” blew up an unnamed federation source. All volumes of the operation have been submitted, explained and approved by the Football Assembly. Harassment campaign to defame him by RFEF “, which seeks to “keep very calm” despite the extent of the controversy.

Facing the charges, Gerard Pique decided to speak live on Twitch from Monday to Tuesday nights. And the 35-year-old admits: “I have nothing to hide, they say. Everything we’ve done is legal. We’re proud of what we’ve done at Cosmos. We’re going to change the format of the competition.” Wanted and wanted to make it more. Interesting for the audience. It has an impact on revenue. The President really liked the idea.”

But he also declared that “Saudi Arabia was not the only option. The United States and Qatar were on the table”. Regarding the part given to it, “10% of the market is relatively low: we thought this was the norm and it was a figure according to all the agencies that charge to do so”. Pique also denounces the “audio taken out of context” before boasting about the progress of the European Super Cup. “I’m just helping the president find a formula that makes sense. I’m trying to help him. I only brought a proposal to the RFEF. Before the format change, the competition was 120,000 euros, And now it’s 40 million.” Above all, he announces that he intends to take “legal action following the publication of the audio”.

ALSO READ  PSG: a group without Ramos or Hakimi against Augsburg

If he refuses to ask for support from the federation (“In my life I will never ask for help and they will never give it to me. A trade deal won’t affect that. It’s stirring to stir the mess”), Pick protested the conflict of interest brought to him: “What is a conflict of interest? The RFEF makes the decision and I only help find a formula that makes sense to them. It’s 100% the RFEF’s decision”.

A few hours later, El Confidential published the rest of their investigation and specifically pointed out that Pique may have used Lionel Messi’s name to promote the organization of the Super Cup in Saudi Arabia: “We have Leo behind”. The player may also have been called upon by Rubiales not to contact the president of the Association of Players in Spain (AFE), David Agenzo. A directive not respected by the Catalans, reproduced by Agenzo: “These are decisions that are taken unilaterally. And I’ll call you as soon as I have all the information, I’ll call you because it One important question is Gerard I also have a bias because you have to go out of Spain. They don’t trust footballers and that’s something we can’t allow.”

During the day, Atlético de Madrid coach Diego Simeone spoke about the matter that is rocking Spanish football. “I’m not going to get into these situations because Pick is very smart and has business, he underlines. These are management that don’t go together. I believe it’s clear that — unless He doesn’t explain himself better – it’s practical that Barcelona and Madrid take part in the competition, it’s not too hard to understand.” A statement in response to the joke started by Rubiales in a conversation with Pique: “Tomas (González Cuuto, member of the legal department of the RFEF and supporter of Atlético, editor’s note) says that Atlético de Madrid will win La Liga. He Here it is next to me… poor thing”.

The RFEF president’s counter-attack did not take long. Luis Rubiales held a press conference on Wednesday morning, in which he criticized the same treatment as Peake. First, explaining how the documents were obtained: “They stole the information on my laptop”.

He continued, “Ever since I took this position (editor’s note in 2018), the attacks on me have not stopped, a total defamation campaign. (…) Who benefits? I am an ordinary person. I’m different from this. Others, I’ve never had beer, I don’t smoke… I can’t guarantee they won’t put a bag of cocaine in my trunk tomorrow. There are people who agree to steal the message “

Rubiales claims to have paid nothing to Cosmos, which is “paid by Saudi Arabia”: “no economic ties. Another lie”. Before defending Gerard Pique. “I have struggled all my life as a footballer so that players do not retire without companies, without studies, without qualifications…,” he says. Let’s hope that more and more people like Pique. Football players come out.”

However, he confirms other information that surfaced the day before, announcing that the player pushed to compete in the Tokyo Olympics last summer, along with youth silver medalists. “There were others (players) who asked me, they accepted. He announced a long time ago that he didn’t want to come back and I spoke with Luis de la Fuente (coach Spanish Hope, NLDR) to let him know. Who called me When you’re a great player and you want to come back it’s normal. Then Louis made a very different decision. It’s in your business and it happens here and we’re honest. He’s not the only footballer who asked me to.”

ALSO READ  Who is better between Messi and Ronaldo, Liverpool manager Klopp responded

In response to a tweet from a Cope broadcast, Pique defended himself from a deal with the president: “To state that I am asking this favor (Olympic selection) in exchange for a Super Cup deal is morally low. Which is only suitable for a channel like yours, which had already indicated that we were doping at Barca.”

The last file currently known regarding the pickup came out this Wednesday afternoon. Club FC Andorra, owned by the player’s Cosmos group, joined the Spanish third division directly in 2019. The world champion would have asked the president at the time to put his team in the most advantageous pool and avoid Catalonia. “La Rioja, Navarra, Aragon or the Basque Country are more than acceptable. This would be the best region for us, he suggested Rubiales. If you can avoid grouping us with Catalans, all the better”. In response to its president, Pick would have urged: “Being at the bottom of the world, like the Balearic Islands, I think does not change much by placing us in one group or the other”.

Thursday 21 April: Talked about arbitration with Rubiales, President wants to revise his salary

The last transmission of patronage between Pique and Rubiales is as of this Thursday morning. El Confidential revealed a strange exchange after a draw for Barca on the lawn of Real Sociedad (2-2) in December 2019. The president asks for the news from the defender, who immediately complains about the referee not being fined in his favor. His team: “Hey, today they screwed up”.

“He didn’t consult VAR and the VAR guys didn’t say anything either, says Pique. They should have warned the referee. Especially if you whistled[Busquets, editor’s note]in the first half.” “I know they imposed a dubious fine against you, replied Rubiales in an audio message. And I know they didn’t blow a whistle in your favor – a foul on you – I- says one.” The president concluded by telling them that “there is no desire to harm or benefit anyone”. An exchange that took place just days before the Clasico against Real Madrid (0-0) made more noise, raising further doubts about the privileged relationship between Gerard Pique and Luis Rubiales.

In response to these controversies, the President of the Spanish Federation made a new announcement this Thursday on the microphone of the El Programa de Ana Rosa event on Tele Cinco. “I’m going to do this so that there is no coach, player or anyone who thinks that my pay will go up if a referee blows the whistle here and there.” So Luis Rubiales will now have a fixed salary and will no longer depend on bonuses. An initiative that will certainly have to be debated by the Assembly of the RFEF before it can be adopted.

Super League: Agnelli admits it, the project is finished without the English clubs