After dropping Barça and Bayern Munich, PSG will find Manchester City in the semi-finals of the Champions League. Fallen from Borussia Dortmund, the English club finally seems ready to go to the end. Overview of the strengths and weaknesses of this very recognizable Guardiola style team.

The double confrontation against Bayern Munich is undoubtedly an excellent preparation to face Manchester City. Opponents of the English club for the semi-finals of the Champions League, Paris Saint-Germain will find in the Skyblues characteristics similar to those of the Bavarian club. With all the same some subtleties.

This is obviously the hallmark of Pep Guardiola’s teams. Manchester City is developing an excellent positional game, with a little more verticality compared to previous years and constantly players between the lines. Among them, Kevin De Bruyne shines. The Belgian is able to do everything, to move across the width, to project himself, to hurt in the area, to light the cage with long strikes, or to find his partners with fantastic passes. If not him, Phil Foden, Bernardo Silva and Ilkay Güngodan are also threats. “There are always two, three or four players between the lines,” said Federico Balzaretti, consultant for RMC Sport.

Regularly with more than 60% of possession, Manchester City makes their opponents run. At Borussia Dortmund, Marco Reus made it clear after the second leg quarter-final: “The legs are heavy, but that was to be expected, we had to run a lot to close the spaces. Manchester City have a sensational positional game. . It’s very difficult to squeeze them, they are everywhere in a numerical superiority position. They were just better, they played smarter. “

This strength assumes that Manchester City is somehow a mix between FC Barcelona and Bayern Munich. The Cityzens love to cross at the far post, an exercise on which they know how to be devastating. “It’s interesting to note this development. When Guardiola arrived, we had seen a lot of the preferential circuit with centers set back from the side,” added Julien Laurens, correspondent in England.

In the eighth first leg against Borussia Mönchengladbach, João Cancelo had regaled this way with two caviar from the left wing. “Putting people in the area poses problems of choice for defenders,” confirms Louis Saha, consultant in Champions Zone on RMC Sport 1. Unlike Bayern Munich, where Robert Lewandowski and Thomas Müller are primarily wanted, Manchester City have fewer preferential targets. The threat is more diffuse, with the environments that are projected.

PSG, who conceded three headed goals against the Bavarians, will in any case have to be even more careful not to leave one against one to the centerers. This will once again require a lot of work from the wingers of the Parisian 4-4-2.

“If we thought that Bayern were very strong, Manchester City are absolutely exceptional in this ability to put pressure, to recover the ball very high and immediately put in danger”, insists Julien Laurens. It is this strength that allows Manchester City to be one of the least permeable teams in Europe. In the Champions League, before facing BVB, the team managed a series of more than 700 minutes without conceding a goal. To get rid of the pressing, PSG will therefore have to take care of its raises. What will perhaps be easier with Marco Verratti, even if the quarter-final second leg against Bayern Munich showed that other elements could do it, according to Louis Saha: “Gueye is capable, Paredes too … Before, Neymar had to come down too low “.

Lately, Pep Guardiola returns to what has been one of his hallmarks: the tenure of an attacking midfielder in a false No. 9 position. Without a real center-forward, Manchester City sometimes has problems facing well-organized and grouped blocks. In the first leg against Dortmund, the Catalan coach lamented the sterile possession of his players: “We weren’t smart enough with the ball. (…) To play well in the decisive areas, we need a good preparation and it was not good. But that’s normal, Dortmund are a strong team, with quality, and with the quality they have in attack, it was not easy to do what the we wanted to do “. Which shows that PSG will still have to show commitment.

This is the flip side for a team that plays high and likes to monopolize the ball. Pep Guardiola also often struggles with quick attacks. This was seen against OL last season, but also before against Kylian Mbappé’s Monaco. PSG’s very vertical transition game can therefore still do damage. The fresh defeat against Leeds (2-1) demonstrated it again. Just like Erling Haaland’s huge opportunity at the start of the second half of the first leg.

With Ruben Dias, the Manucnian defense has improved considerably and appears generally slower than that of Bayern Munich. Still, the characteristics of John Stones and Rodri, who are not excellent for turning around, may perfectly suit Kylian Mbappé and Neymar. Especially since Manchester City sometimes falls back into their own purring, as Louis Saha points out: “It is a team that also has less rhythmic times, where they invite the opponent to gain confidence”. Offerings not to be missed.

Since his arrival at Manchester City in 2016, this is the first time that Pep Guardiola has qualified for the last four of the Champions League. It had been three seasons in a row that he was eliminated at the quarter-final stage. Also, he has not found the final since the 2010-2011 season with FC Barcelona. Even his time at Bayern Munich had not been successful at this level. This may have developed a certain complex in the Catalan coach, who was accused last season of departing from his principles and attempting losing tactical blows to try to break the glass ceiling.

Bayern-PSG: players under threat of suspension 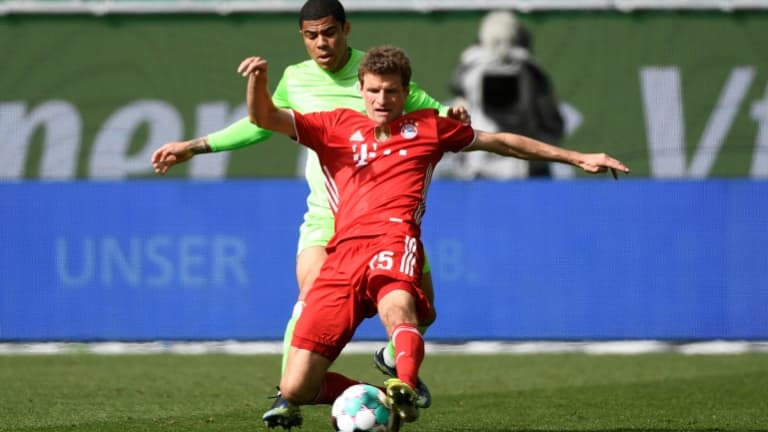 Bundesliga: Bayern fall in Mainz with a blunder from Neuer, title will wait