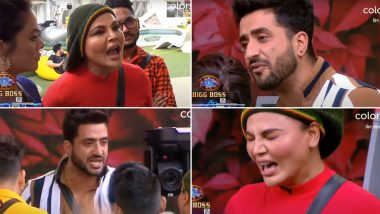 Bigg Boss 14 Promo Video: On February 12 episode of Bigg Boss 14, there will be a fierce battle between the contestants once again to reach the finale. In tonight’s episode, there will be a lot of fight between Priyam Money with Aly Goni and Rahul Vaidya’s Rakhi Sawant. It was seen in the promo video of the show that Bigg Boss announces that if the householders want to reach the finale, then they have to sacrifice 14 lakh prize money. Rakhi Sawant has fierce arguments with Eli and Rahul about this.

Rahul says to Rakhi, “Are you ready to put 14 lakhs?” Vapo says, “I have to go to the finale.” After this, Eli tries to convince Rakhi that 14 lakhs is a big amount because it is a winning amount and one is entitled to this amount. He says, “Whoever is winning has reached here after 20 weeks of hard work.”

After this Rakhi gets emotional and says to Eli, “Hey my friend, have I come here to worship, I have come to ring the temple bell. I too have to go to the finale.” At this Eli gets angry and yells at Rakhi that 14 lakhs are not fun and they decide to collect money on their own.

Rakhi tries to stop them but they do not believe, due to which she starts crying out loud. Let me tell you that the ‘Ticket To Finale’ task continued in the last episode of the show where the families once again broke all the rules. In the end, Paras Chhabra was asked to decide that a finale should be sent.

Paras chooses Rubina Dilac for this, which makes other contestants angry. After this, Rubina is asked that she wants to take someone with her to the finale? After this, she takes the name of Nikki Tamboli.