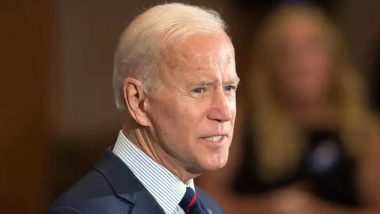 Washington, March 12: America’s President Joe Biden on Thursday signed a US $ 1,900 billion ‘US Relief Plan’ to strengthen the country’s economy. Under this, arrangements have also been made to provide assistance of $ 1,400 to most of the people of America. Biden called it a historic step that will strengthen the backbone of the country and the working and middle class people who build the country will get a chance to move forward again.

Biden told reporters at the White House, “The bill was discussed and debated for several weeks. It became clear that a large number of American people, whether they are from the Democratic Party, Independents or Republic Party, strongly support the US relief plan. “Later, the President will also address the nation. Also Read: American: Bharatvanshi Maju Varghese appointed Deputy Assistant to President Biden and WHMO Director

White House press secretary Jane Saki told reporters that one year after the lockdown due to Kovid-19 has been completed, the president will speak directly to the American public on this occasion. Biden will tell the public what work his team has done so far. Next week, Biden and the Vice President will go on a nationwide tour to promote the American Relief Plan.