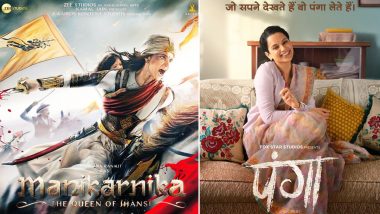 Kangana Ranaut Wins National Award: Bollywood actress Kangana Ranaut has achieved great success just one day before her birthday. She has received the highest actress award for the films ‘Manikarnika: The Queen Jhansi’ (Manikarnika: The Queen of Jhansi) and ‘Panga’ (Panga). News agency PTI has tweeted giving information about this. Kangana won the hearts of people by playing the role of Rani Laxmibai in Kangana in the film ‘Manikarnika’. Actresses Ankita Lokhande and Mishti Chakraborty were also seen in this film. The film was directed by Kangana with Krish.

Talk about the film ‘Panga’, in this sports drama film, Kanga along with Richa Chadha, Neena Gupta and Jassi Gill were in the lead role. Kangana played the role of a kabaddi player in the film. The film was directed by Ashwini Iyer Tiwari. Both these films received good response from the audience.

Kangana also received a lot of praise for her character in the film. It was announced today that Kangana has received the National Award for Best Actress for her performance in both these films. Please tell that today the 67th National Film Awards were announced at the National Media Center in New Delhi, where this information was also given about Kangana.

Kangana will celebrate her 34th birthday tomorrow i.e. on 23 March. On this auspicious day, he will release the trailer of Jayalalithaa biopic film ‘Thalaivi’. Kangana is in the lead role of Jayalalithaa in this film.