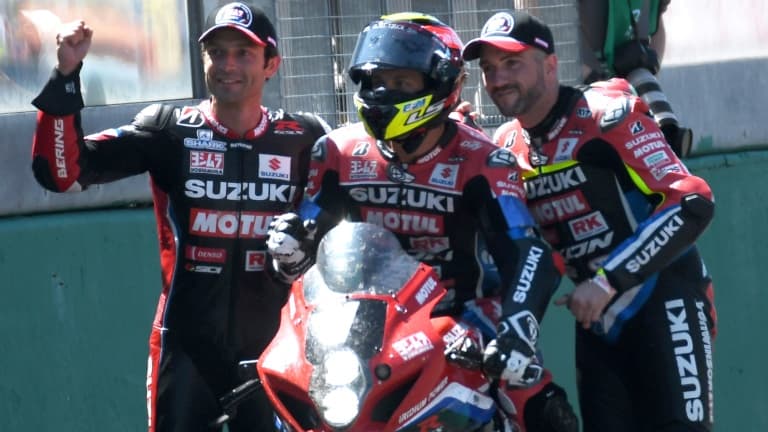 On the handlebars of the Suzuki n ° 1, Gregg Black, Xavier Simeon and Sylain Guintoli won the 24 Heures Motos on Sunday at the Le Mans circuit. A first since 2015 for the Japanese brand.

Suzuki returned to victory at Le Mans by winning on Sunday the 44th edition of the 24H Motos with the Yoshimura-SERT team, on the famous Bugatti circuit, which had not happened since 2015 for the Japanese brand. The crew of the N.1 bike, Gregg Black, Xavier Simeon and Sylain Guintoli, did most of the race in the lead.

With this result, the Hamamatsu firm scored its 13th victory in the Sarthe, tied with the Japanese giant Honda. But it is the manufacturer Kawasaki who keeps the record for success in the Le Mans race with one more victory than the other two Japanese brands.

The new Suzuki structure, entered in the world endurance championship and assembled around the famous SERT (Suzuki Endurance Racing Team, created by Dominique Méliand in the 80s), benefited from the abandonment of the Yamaha N.7 du Yart in the evening of Saturday and the setbacks of the Honda N.5, defending champion, throughout the weekend.

Behind closed doors for the second year in a row

The Kawasaki N.11 is second, the BMW N.37 3rd, after crashing early in the race and making a spectacular comeback. The N.5 of Team FCC TSR Honda France with in particular Mike Di Meglio on its handlebars finished 10th. In the Superstock category, the CBR1000 N.55 of National Motos finished first and 5th overall, two laps ahead of the Kawasaki ZX10R N.24.

The 44th edition of the 24H Motos at Le Mans was postponed to the weekend of June 12 and 13 last spring, due to the health crisis. It took place for the second consecutive year behind closed doors while it traditionally welcomes tens of thousands of spectators. Forty-six teams took the start, against 39 in 2020. The Yoshimura-SERT completed 855 laps on the Bugatti circuit, and this victory allows it to take the lead in the EWC World Endurance Championship.